I am very happy, and rather proud, to display my first Infantry Regiment for my Brigade under the command of Gen. Johnston Pettigrew. I chose his brigade for a number of reasons, most important of which is my deep respect for Pettigrew's leadership - it also helps that my cousins share a last name (though most likely no relation). The last time I painted ACW troops they were 15mm and that was some 17 *cough*cough* I mean several years ago! When we decided that we were going to "refight" Day 1 of the bloodiest battle on American soil, I knew that I had to lay claim to Gen. Pettigrew's Brigade as not only were they really a Divison in size but they were also involved in two days of heavy fighting: the first, of course, being the first day but they also found themselves as a lead brigade in Pickett's Charge.

As I plan to increase my ACW collection exponentially after this I figured this brigade of North Carolinians was a great was to start. I only hope I do them justice. 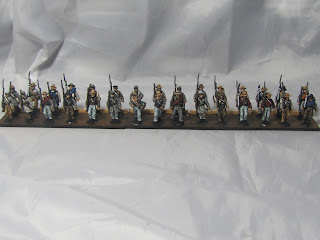 To kick off, here is an overview shot of the regiment, 30 models strong. Now, you will notice that I haven't based these yet nor do I plan to until all the brigade is complete. That way there's less chance of any variation between them. 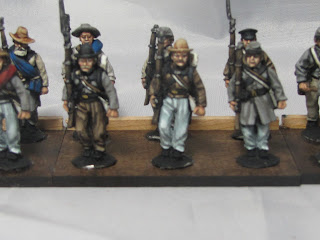 For the most part I loved how most of the models came out. All told there are probably 40-50 hours in the regiment in order to have lots of color variation etc. By 1863 the Confederacy had gone to Cadet Grey as it's uniform color, but most of the soliders wore whatever they could, and if they were lucky had shoes. Granted the Perrys didn't sculpt any barefoot so I didn't touch the feet... but still. 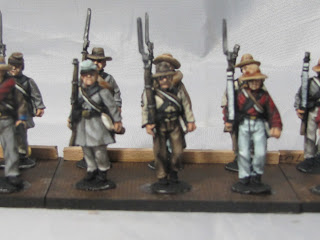 This guy in the middel is perhaps my favorite of the regiment, for some reason I just love the brown and tan colors on him - they fit well with many photos I've seen of serious re-enactors. I added a few red shirts as, so the story goes, at the beginning of the war no soldier left home without something red. 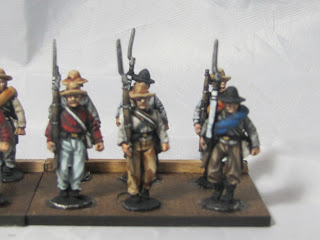 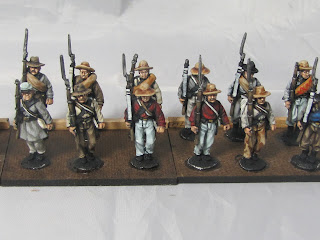 Well there it is blog readers, the first of Gen. Pettigrew's Brigade and, if I am not mistaken, the first of the Confederacys regiments complete :). Now, in fairness I ordered these as soon as I got home from Adepticon but I started them sometime last month.

Next up is a little cavalry and then I plan to tackle a unit for my WAB tourney army of Teutonic Knights so it will most likely be another month or two until I hit up the next Southern infantry regiment, but I hope you all enjoyed the pictures and please feel free to leave some C&C. If you have any questions I am more then happy to answer them.

Until then keep painting. -Alex Akers
Posted by AkersMinis at 3:17 PM