Paint on the 6th Wisconsin

It has been great to see a nice little surge from the Guns of April team members of late, post pics of their WIP and finished units. I'm sure as things get closer to April we'll see an even bigger increase in the quantity of posts!

Anyway, on the Union front I've finished putting paint to model for my 6th Wisconsin unit (pictured above) and painting up a firing line was a nice change from the marching pose of the 2nd Wisconsin. I'll be doing all the basing once I've completed the two units pictured below.

Here is the first shot of the 24th Michigan regiment. For this unit I used a mix of Perry miniatures, almost all of them wearing frock coats (so there was no need to sculpt them). The models were lacking, however, the Hardee hat made famous by the Iron Brigade (aka the Black Hat Brigade), so a solid number of this unit are now wearing them. I decided these boys would be the 24th Michigan as I think the mixture of heads and the variety of equipment gives them the feel of a rough and ready unit a bit late to the game, fitting the regiment from the wilds of the hand-shaped state that was the last to join the brigade. 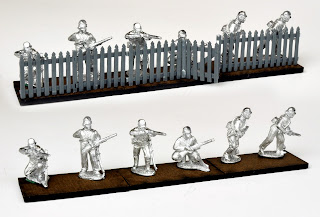 And here are my 6th Pennsylvania Cavalry unit dismounted. I've modeled them so they will be behind a white, picket fence (from the Perry/Renedra sprue), but I've left it off for ease of painting.

Hopefully my fellow Union players are cranking out their models and will have something to show us very soon.