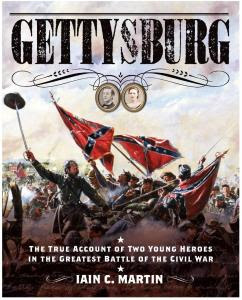 On the anniversary of The Battle of Gettysburg, I thought it was fitting to review a recently published book on the battle by a good friend, fellow gamer and avid historian, Iain C. Martin.  The book is titled "Gettysburg: The True Account Of Two Young Heroes In The Greatest Battle Of The Civil War."  The book is a 172 page hardcover book intended for the young adult reader and those new to the period and the battle.  Iain has published a number of other books on various periods and you can find a more complete list of those at the following link.

Although intended for a young adult audience I found the book a fantastic reference on the battle.  For those like myself who have a very general idea of the battle, I found the book gave a very readable analysis of the battle and the major players and avoided being bogged down by excessive details and analysis.  So although a "general history" I found it contained exactly what the initiate to The Battle of Gettysburg needed to comprehend the scope and importance of the battle.

The book is filled with quotes from many sources, from the legendary such as Robert E. Lee to the relatively unknown.  This later group includes two young adults who, as civilians living in Gettysburg, published first hand accounts of the battle many years later.  Iain has a real knack for weaving the stories and words of those involved into the narrative, which brings the story to life in a real way.  Rather than an academic treatment of the regiments, charges, and skirmishes of the battle, the book puts a human face to the battle and allows the reader to feel a emotional connection to the events.

Beyond the well detailed chronicling of those three days, the book gives a brief analysis of the importance of the conflict and it's impact on our country even today.  By no means is this a detailed historical treatment and debate but it simply attempts to highlight other historians have argued is the lasting impact on our country.

In addition to wonderful coverage of the battle itself, the book is packed full of period photographs, beautiful artwork and military maps.  The book is a wonderful reference for any miniature gamer looking to recreate the units of this period in miniature.  It is the sort of book you could sit and page through, stopping to analyze pictures from the period or to admire the dynamic and beautiful artwork by Don Troiani.

Although marketed as a young adult book I think most fans of civil war history and especially novice historical gamers like me will find this book thoroughly readable and a wonderful visual and historical reference.  I know this book will become a permanent part of my historical wargaming reference collection and see use for many years to come.
Posted by Jamie at 7:50 PM