Finally, after a year of planning, modeling, painting, and cursing the size of the project, the 2013 Guns Of April Gettysburg game has been played out. Last Friday night at Adepticon, most of the GOA team gathered and threw down on our table that had traveled all the way from Maryland on the Battlefront Miniatures truck. As is always the way with big, collaborative projects, there were a few hiccups along the way. These hiccups included:

• One team member unable to deliver his four regiments of Confederates to Rob before he left for the show. Thankfully Merle had thought to bring some spares and after a frenzied hour of flocking, we had enough modes to cover the shortfall.

• Yours truly forgetting to bring his Guns Of April shirt. Not much that could be done about it, but rest assured I did not play sans shirt.

• The rental truck containing our tables and terrain leaked as it traveled through the wild storms that lashed the Midwest on their journey out to the show. The boards suffered the worst of it, with the surface buckling in a number of places, and the PVA glue being "reactivated" - creating large patches of white on the tables. Fortunately we were able to move a couple of tree bases around to cover the most glaring of these spots. As you can see in the table shot above, the overall effect wasn't diminished as the eye was drawn to the details, filling in "the gaps" as it were.

We had six team members playing: Dave P, Joe, Merle, and myself for the Union - Rob and Jamie for the Confederates. Fortunately Merle's buddies Chris and Jay volunteered to fill the command shoes for the Rebels, and we set off with four players aside.

UPDATE: I forgot to mention we had over 1,000 models on the table at one point, not too shabby ; )

Anyway, on to the photos! 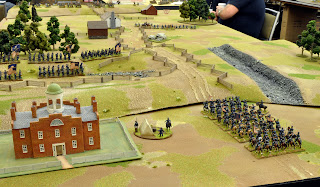 Looking west along the Chambersburg Pike, the famous Seminary in the foreground (graciously supplied by Jim Ferich) and flanked by Buford's Cavalry Brigade (commanded by Dave P). 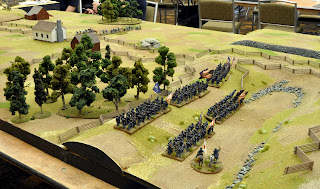 The view from the southeast, the Iron Brigade (commanded by me) in column advancing along McPherson's Ridge and Willoughby Run. 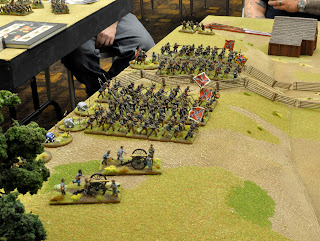 Archer's Confederate Infantry Brigade (commanded by Rob) appear from the west, ready to advance on Gettysburg. All other Confederate brigades were off table and would enter play randomly. 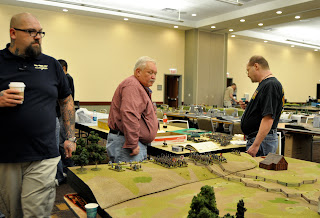 A great command roll saw the Iron Brigade barrel down the pike towards Archer's Brigade (their historical counterparts in the battle). 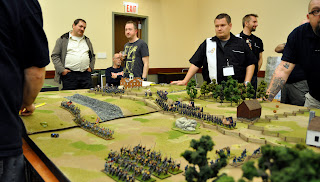 At the start of the second turn, two of the Confederate Brigades appeared to the north. It was with no small amount of consternation that the Union realized, with some good rolling, that the rebels could break the back of the North early on. We also had plenty of onlookers for the game, anywhere from 5-25 at a time. Not too bad for a convention founded on sci-fi and fantasy gaming.

Here you can see the Confederates advancing onto the table, starting to close in on the Iron Brigade on the right, and traversing the Railway Cut on the left. 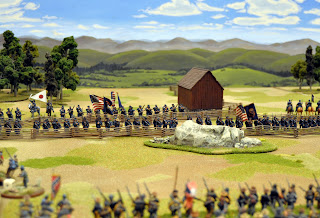 The Iron Brigade hunker down behind the fences on the Chambersburg Pike. 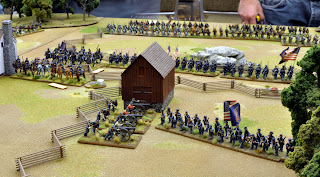 By now the Union Artillery Brigade had entered play but unfortunately, due to some miscalculations, found itself up against a fence, still limbered up. The following turn saw the gunners handily beaten in combat by the boys from the South. Without a single shot being fired, the Union's much-valued support was removed from the table. 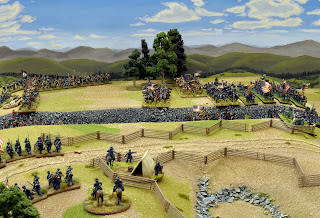 Looking north we can see the Buford's Cavalry and a Union Infantry Brigade (commanded by Merele) building a solid defensive line across the Railway Cut, hoping to prevent a breakout by Jamie's Confederates.

About two thirds of the way through the battle, you can see (roughly) the state of affairs. The Union right is pretty solid, while it's left is seriously strung out and under attack from two sides. Also, most of the cookies have been eaten ; ) 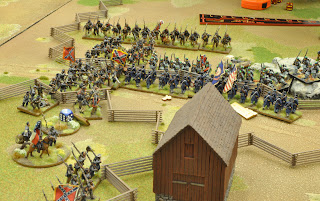 On the western end of the Union line the 2nd Wisconsin are under assault from rebels to the left and front. Thanks to some surprising dice rolling I was able to bust out a paraphrase of the quote that lead to the Iron Brigade's nickname (McClellan to Hooker: "What troops are those fighting in the Pike?" Hooker replied, "[Brigadier] General Gibbon's brigade of Western men." McClellan stated, "They must be made of iron."). After three combat phases, however, the 2nd Wisconsin finally failed their break test and were forced to retire. 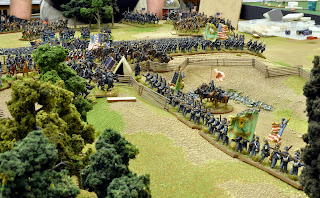 And finally, Joe's Irish Brigade (after four turns of nothing but one move per turn) were able to create a new defensive line, just as the Iron Brigade were broken and started to fall back.

In the end, we all agreed that it had been an excellent game and that the result was a minor Union victory, but not so strong as to cause the Confederates to buy us beers. There was a little bit of backslapping and a few huzzahs, before we launched straight into discussions about next year's project. But more on that later...

Thanks to everyone who has been following this blog for your comments and support along the way : )

Cheers
Dave
Posted by davetaylor at 9:26 AM