You can never find a good staff officer when you need him. 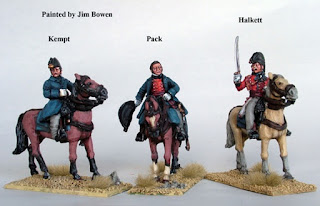 There are quite a few nice models out there to represent various British Generals (and other ranks) and quite a few of those lovely models are from Alan and Michael Perry. One thing I have noticed, however, is there is an alarming absence of handy Staff Officers and ADCs to assist the commanders in the execution of their commands. Amongst the Perry French range you can find more packs of commanders, staff officers, hangers on than you can find artillery pieces! Not so for our poor British officers. Seems like Wellington was forced to write down his own orders and ride them off himself to his various sub-commanders. Surely not.

Anyway, this has inspired me to place an order for a variety of command packs from various ranges that I can then tweak a bit with head swaps and greenstuffed accoutrements to create some cool bases for the four Brigade commanders and one Divisional Commander I'll be painting up for our Guns of April game at Adepticon next year. I love the two officers at the table writing orders in the pack above. They'll no doubt make it on to the Division commander's base.

I love the horse holder, pointing officer, and rider about to leave with orders from this Dutch-Belgian pack above. They'll probably be spread across a few bases. 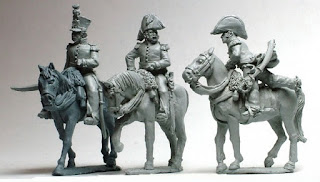 And Prince Bernhard of Saxe-Weimer (above center) will be on a base with the ADC mounting up next to him, suitably adapted to a "British in the Peninsula" style. 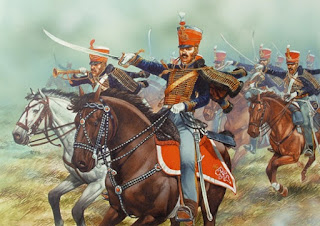 Oh, and the order will have a box of the new Perry Hussars in it, to be painted up as the 1st Hussars of the KGL.

I'm looking forward to getting started on all this over winter : )

Cheers
Dave
Posted by davetaylor at 11:51 AM