My order of Perry Miniatures "staff officer" models came in early this week. In an attempt to regain a bit of sanity (following the birth of my second daughter), I quickly cobbled together a few command base vignettes. I still haven't set my lights back up after our Thanksgiving party, so these were shot on the fly with my phone, my apologies for the lack of crisp detail. 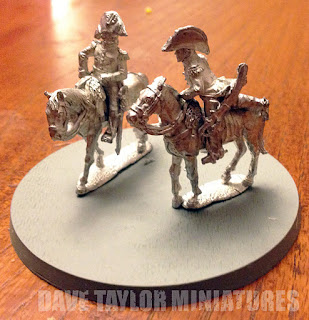 First Brigade Commanders: Here we have Von Lowe (mounted) and Femor (mounting up), the joint commanders of our First Brigade in the battle. In reality they each commanded a brigade as part of the Guards Division. I'll be adding a horseholder to this vignette, keeping Femor's horse steady while he mounts up. 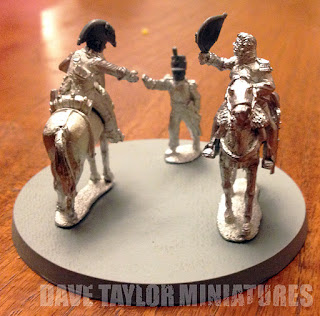 Second Brigade Commander: On the right is Wheatley, commander of another brigade in the Guards Division (this one including two Highlander regiments - the 42nd and 79th). On his base are to ADCs, one handing off a packet of orders to the other (mounted). I've already switched out the original headwear of these three models, giving two of them the ubiquitous bicorne, whilst the other sports a shake that marks him out as an officer of a Light Infantry company seconded to Wheatley's staff. 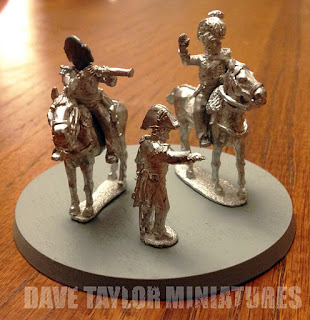 Third Brigade Commander: And finally, for the moment, we have Van DeLeur (mounted) on the left, looking through his telescope towards a threat indicated by another staff officer on foot. Next to them sits an officer of the Royal Horse Artillery waiting to guide the fire of the batteries accompanying this brigade from the Light Division.

As most of these models are from Perry ranges other than the British, there are a few changes I need to make to their uniforms. Primarily it's the head swaps (done), followed by adding officer sashes, sword belts, and the occasional altered jacket style.

Cheers
Dave
Posted by davetaylor at 9:55 AM