I am somewhat late to this ball and have, to date, been remiss in posting the progress of the French third brigade.  So, I’m attempting to remedy that now, with a quick introduction and update on recruitment.

First, this project marks a full-circle return for me, as far as my wargaming career goes.  In high school, I used to frequent the now legendary shop of one Todd Fisher.  The Emperor’s Headquarters, here in , was a for wargamers in general, but Napoleonic gamers specifically.  Todd, who has been featured on the History Channel as a Napoleonic historian of no little renown, recruited some of us younger painters (we were, at that time, exclusively playing Warhammer 40K) to help paint his epic 15mm Empire armies.  Eventually, I rose through the ranks to the level of troop-pusher and even earned the right to an occasional brigade command.  But it was my college friend Sam (who infamously carried around the Empire rules- all 16,000 pages- in his pack during Desert Storm) who really got me enthusiastic about gaming battles that didn’t involve, to a lesser or greater extent, Chaos daemons.

But I apologize for waxing sentimental.  I now find myself, for the first time since those salad days of sprawling EHQ battles, painting Napoleonic models.  Dave Taylor is the kind of gamer who is so enthusiastic that you can’t help but catch some of his passion.  From the first conversation about a large, exhibition game of Black Powder at Adepticon, I was in.  100%.  I had already started collecting some of the Perry Brothers’ French infantry, so I was more than agreeable to take up arms alongside Brien and Joe, taking responsibility for the French third brigade for our game.  I have no doubt that, come Adepticon, we’ll defeat the “nation of shopkeepers” long before the bar closes.

My first battalion (work in progress shot below) is nearing completion.  I’ll post some more detailed shots of the finished bases just after the holidays.  My plan is to update regularly and stagger my infantry battalions with guns, command, and my Dragoons.  Well, thanks for letting me drone on.  I promise my next post will be 90% photos of toy soldiers. 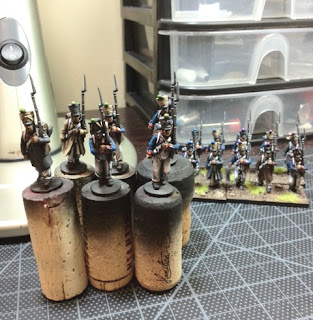