First Glimpse of the Iron Brigade

In order to keep me motivated when I'm so close, but yet so far, I decided to take a couple of shots of the assembled Iron Brigade thus far.

Here are all the boys, two regiments in firing line, three regiments in march, one squadron of cavalry (both mounted and dismounted), plus my command base and a few casualty markers. 173 models in all. 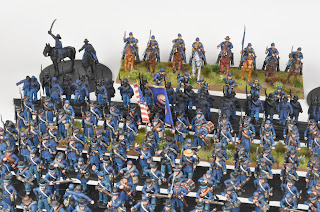 And here's a closer look at the last regiment to be finished, sandwiched in between the only two completed units ; )

Only a month to go!

Cheers
Dave
Posted by davetaylor at 9:47 AM