I worked a half-a-day on Good Friday and decided to base all of my elements that we ready for it. I was originally going to base my entire army at the end and planned to take one full week basing my stuff. Well...........24 hours later and nearly 75% of my army has scenic effects applied to them. I was going into Friday evening with mixed feelings. First of all, I was getting quite burned out of highlighting blue and black and took the basing project as a nice break. I was worried about whether or not I would be able to complete my overall task but when I finished in an evening it excited me about completing my project. So, the 'distraction' ended up reinvigorating my willpower to finish my infantry. So, I have 18 days in which to finish highlighting 60 miniatures and base them. A very possible goal if I don't have too many life issues get in the way. Enough of the blather. Here are some pictures........ 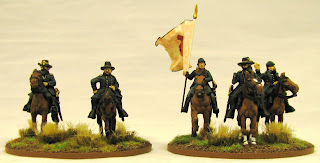 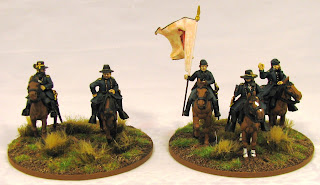 Posted by Krone Enterprises at 7:27 PM