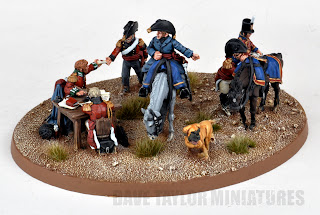 Last (British) post I mentioned that my Divisional Command stand would be next up. Joe jumped in with a good look at his progress, only seven fusiliers and his cavalry to go for him, and they're looking great too. So, we're now back to the Brits for a post or two.

As I've mentioned earlier, there aren't a lot of British Staff Officer models out there. That's why this stand sports only one truly British model who (for our purposes) represents the First Division commander at Salamanca, Major-General Henry Campbell. The model is from the Perry's British range (as Major-General Kempt).

The remaining models are from French packs from the Perrys, most of them modified in some way to make them look more British (or German).

I hope you like them, and that they serve us well on the field of battle. 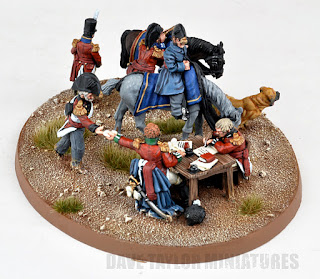 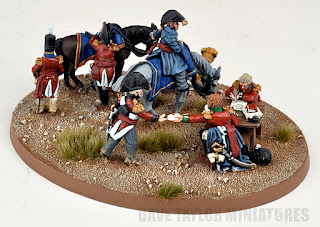 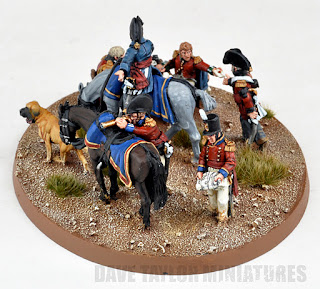 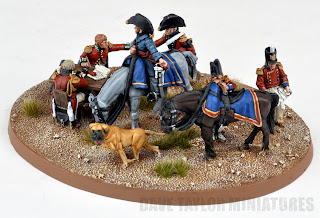 For those of you who might be wondering, the dog is from Warlord Games' Celt Mastiffs pack, from their Hail Caesar range. I spotted a dog just like it on a table at Salute last year, asked the guy at the table where it was from, then dashed off to the Warlord stand to buy a pack of my very own. The pack has been sitting on my desk since April last year, just waiting for an opportunity like this. While I haven't read anything that suggested (or even hinted) Campbell had a dog, I thought it would make a great addition to the base.

You can take a look at the table (Alternative Worcester 1651) that inspired the purchase of the dogs here. And if you look closely, you might be able to spot the dog in the pics.

Cheers
Dave
Posted by davetaylor at 10:33 AM