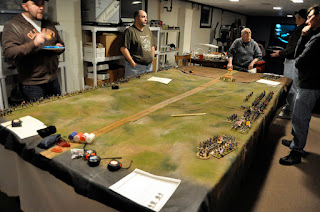 On Friday night a few of us were invited over to Jim Ferich's wargaming den (a wonderful place filled with all manner of great terrain and vast swathes of wargaming miniatures of all periods). Jim regularly hosts meetings of the DAWGs (Delaware Area War Gamers) and on this occasion Jim, myself, Joe, Brien, and Chris were joined in the gaming fun by Joe and Eric. Ly and Kyle were our patient observers.

As Brien and I have had little experience (read almost none) with Black Powder, it was a great opportunity to throw down on a 12'x6' table with the full Orders of Battle for our Salamanca game. Joe and I brought our painted models along and the remaining troops were ably supplied from Jim's ample collection (Jim pointed out that if the Brits needed a few more battalions he had 16 more on hand!).

Seeing the armies out on the tabletop was great, as it allowed us to throw around a few ideas about actual deployment of the troops and creating a few different objectives for the game. In the end we decided that the church (initially held by the 95th Rifles) at the far end of the table would be an important objective, as would the point where the road led off the table. The hills on the long edges of the table were the only other significant features, so "high ground" was determined as the third objective. We launched into the game with our three infantry brigades per side on the table and our cavalry brigades in reserve (with adjustments to the locations they could deploy depending on the turn they arrived). 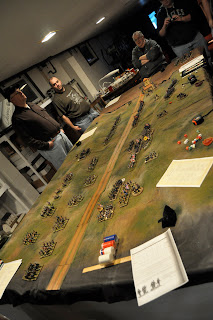 The French kicked off with a great example of how varied actions can be in Black Powder. On the left, Jim's brigade advanced three moves and ousted the 95th from the church in the second turn, whilst in the center, Joe's brigade became mired in a series of poor command rolls, allowing Eric's Guards units to gain the upper hand. On the French left, Brien's troops advanced well enough, and when the cavalry entered on turn two, that end of the line looked incredibly daunting for Chris's British brigade.

We fought back and forth for three hours or so, playing through five turns and learning a LOT about the game as we went, and wrapped it up as the second of the French Brigades reached it's breaking point. Looking over the table and assessing what might have happened should the game have gone on another turn or two, we decided it was a minor British victory. To be more precise it was characterized as a "Minor victory to the British, who are not allowed to brag too much about it, and no-one is buying anyone any beers."

So, fun game, lots learned, and a few tweaks for the OOBs, deployments, and objectives suggested. A big thank you from Brien and myself to Jim, Joe, Chris, Joe, and Eric for being so patient with us as we played through the playtest of what promises to be a fun game at Adepticon!

Cheers
Dave
Posted by davetaylor at 7:53 AM