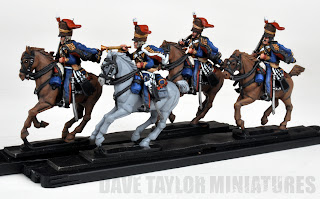 Despite promising myself I'd be working on something else, the playtest game got me in the mood again to paint more Brits, so with just my Hussars to complete for the big game, I set to work on them. 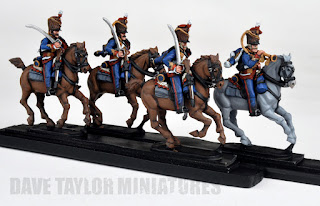 These are the first four of the 1st KGL Hussars (three troopers and a trumpeter). I think once they're complete they'll probably be the most gaudy of my units ; )

It is always interesting painting up new units for my army as I learn so much more about the uniforms and, by extension, the attitudes of the time. With these Hussars I got to learn four new words too: shabraque, pelisse, sabretasche, and dolman. Pretty cool. One note I must make about these Hussars is their pelisse. Although it was common for the pelisse to not be worn in hotter climates (such as the Peninsula) I just had to include them. After all, the pelisse is one of the key things that to me says "Hussar!"

PS. I used to call the pelisse "that fancy jacket thingy".
Posted by davetaylor at 12:11 PM