Greetings All,
Well until now I have stayed somehwat in the shadows on this progect as life has been crazy, but I am ready to show you all the first of my two regt's that will be taking the field at Adepticon in April for the side of King George! Now I actually finished these about a month or two back but again life was busy so it took a while to get pictures of them and then get posting about that so I do apologize. Since this was the first time I have painted Napoleonics in over 15 years I wanted to try something new and used the army painter green  as the base coat. 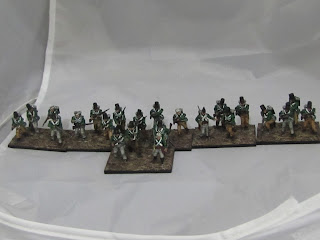 I apologize for the picture but the close shots weren't comming out well. As Far as the army painter I would say if I was going to dip the army and shoot for a basic quality it would be ok but I think for my painting style it wasn't the best choice but thats ok. Overall I am looking forward to this and may even expand the brits into a brigade as normally I am a French fan but hey we all have roles to play:). Overall I am extremely excited for this and I look forward to what is in the works for Adepticon 11.