You know whats going to happen here in the morning? The whole damn reb army is going to be here. They'll move through this town, occupy these hills on the other side and when our people get here Lee will have the high ground. There will be the devil to pay! The high ground! Meade will come in slowly, cautiously. New to command. They'll be on his back in Washington. Wire hot with messages 'Attack! Attack!'. So he will set up a ring around these hills. And when Lee's army is nicely entrenched behind fat rocks on the high ground, Meade will finally attack, if he can coordinate the army. Straight up the hillside, out in the open, in that gorgeous field of fire. We will charge valiantly... and be butchered valiantly! And afterwards men in tall hats and gold watch fobs will thump their chest and say what a brave charge it was. Devin, I've led a soldier's life, and I've never seen anything as brutally clear as this. -Major General John Buford (from the novel, Killer Angels) 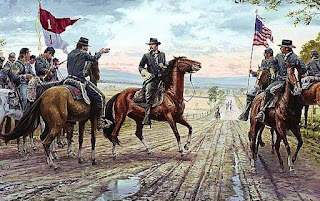 I'm a little late to the party, but my painting has started in earnest. When we first considered the idea of doing a rough approximation of the First Day at Gettysburg, I knew that Federal cavalry was going to be an important part of our project. I also felt that, instead of attaching the various cavalry regiments to infantry brigades, we'd build a separate cavalry brigade. In this case, based on Buford's First Division, First Brigade- Colonel Bill Gamble's brigade. I volunteered to paint the 4-5 cavalry regiments that will take the field, along with their supporting artillery. I would then have the honor of commanding the Union cavalry brigade come Adepticon. With this responsibility foremost on my mind, I have started building the brigade with renewed ferver!
Gamble's brigade includes some home-town regiments:
8th Illinois
8th New York
Companies from the 12th Illinois and 3rd Indiana
I'll probably end up supplementing these with a couple of regiments from Devin's brigade, giving a nice mix of the cavalry troops present on the opening day of the battle.