My army progress has been a little slower than I would have liked but I am moving along quite nicely since my return from the holiday break. Although I don't have any finished units I am working on the army in steps rather than one unit at a time. I am base coating and 'dipping' everything before I go in for the highlights. At this stage I decided to photograph my units ready for the 'dip'. 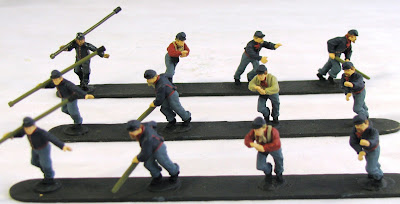 My artillery crew. The one crewman suffered a horrible fate when I attempted to dip him and the dip was beginning to dry out. I added some paint thinner to the dip and it only made things worse beginning to pull the paint from the miniature. So, I threw out the dip and $30 later I was back in business.

The cannons are done. Rather than dip them I used a brown wash to give them some depth after base coating them. Once I finish off the bases I will give the cannon a little weathering. 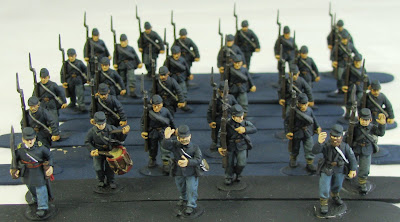 A 30 man regiment ready for highlights. I started highlighting the command elements but decided to finish the army before moving on to the highlights. If I a desperate I would rather have the miniatures on the table then not fulfill my obligations.

18 of the 30 man regiment ready for dip. I should hopefully have the other 12 done this weekend.

Here are 3 of the 30 man Zouave regiment. I really wanted to see what these guys were going to look like so I have been working on them a little at a time. There are a lot of details to paint on this regiment so I add them in the mix when I am sick of painting blue and black.

Here is the back to show some of the details. Nice miniatures and I look forward to painting the Confederates which are sculpted similar to these. 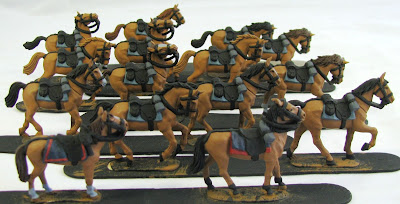 Here are the horses for my cavalry and command stand. I opted for a regiment of 12 but I think that will be reduced depending on the army build out. I guess it could always be split into two 6 man regiments but at least I have options.

Here are the riders for my cavalry. I am painting an additional standard bearer because I want to have the divisional flag on my command base.

That's it for now. More to come soon and we prepare to whoop up on some Rebels.

Posted by Krone Enterprises at 11:15 AM