And your Objective is...

During our playtest at the beginning of February, we determined that three different objectives would be the way to go. As our gallant forces will both start the game marching south to link up with the rest of the French and British armies, we designated the road exit on the southern table edge as objective number one. The second objective will be the small chapel on the southern table, and important defensible position. The third was originally "the high ground", the ridgelines on both long edges of the table. Despite us being "gentleman wargamers", Joe and I both recognized that the vague term "high ground" could cause some concerns later on.

To rectify this problem, we decided we would create smaller objectives that were easier to capture or defend. Enter a wonderful post by Mr Awdry on his blog 28mm Victorian Warfare. In this post he built a water cart for his Colonial adventures from some great model pieces from Trent Miniatures (which is owned by Duncan Macfarane, former owner and editor of Wargames Illustrated). As Michael also points out in his post, this idea originally came from the Arcane Scenery and Models blog, where Duncan's friend (known only to me as Captain Splendid) had built one last September. 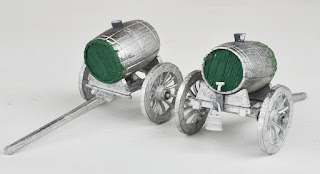 So, I sent off the request for two of the Gribeauval Limbers and a pack of Large Sherry Casks. Once they arrived I constructed the water carts as described in the two linked posts above. Unfortunately my sherry casks were suffering from a small casting issue on the ends so I went to work with a bit of putty and all was set right.

Rather than have the water carts lying around, I needed them to be mobile, trudging along with the rest of the thirsty and weary soldiers. After taking a look through the Perry Miniatures website for other ideas, I stumbled on their Oxen Teams. A quick order later and they were on there way to me from the UK. The day they arrived I quickly cleaned up the pieces, stuck them on my painting sticks, and primed them white (uncharacteristic of me, I know). A wash with Gryphonne Sepia and some quick highlights with Vallejo Pale Sand and they were ready for their patches of reddish brown.

Initially I had planned to paint one water cart in grey and the other in green (to match the artillery carriages of each army), and I was going to have the ox teams lead by a rifleman (for the British) and a voltiguer (for the French). In the end I settled for a different grey for both (with several washes on the lower edges of the new Citadel Agrax Earthshade wash), and left off any "handlers", reasoning it would mean I could then comfortably use them in any army at a later date, and realizing it would be MUCH easier to complete ; )

I hope you like them, now let's see if we Brits can't wrest that water cart on the left away from the Frenchies!

Cheers
Dave
Posted by davetaylor at 7:44 AM