Why the red coats?

So, the blood doesn't show.

With a game like Black Powder, where all your models are either on the table or off the table, you need to have something to mark the declining status of the health and morale of your units. There are, of course, plenty of ways to denote these things - during our playtesting we used poker chips or Warlord Games sell laser cut tokens (just two examples).

Well, I figured enough effort had gone into the battalions of fine British soldiery that they deserved something a little more special. Above (and below) are the first batch of my casualty/shaken markers. Once a battalion takes a casualty, the marker will be put down and the red d6 turned to 1. As they take more casualties I can turn the d6 to the appropriate level. These models are from the Perry Miniatures French heavy cavalry boxes. I have a handful of Perry metal British casualties on their way to me as I type. I hope they arrive in time! 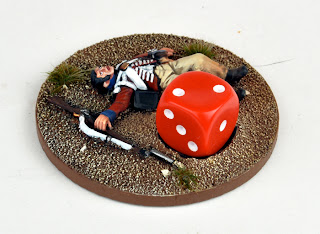 And, as disruption plays an important part in the game too, I figured some other markers would do the trick there. Below you can see a half dozen casualties from the Front Rank British range, most of them clutching their painful gutshots. The chap on the far left is converted from a Perry plastic rifleman, again clutching his wounded stomach. All of these have been based on hex bases to make them stand out at a glance from the other, larger and rounder casualty bases.

With less than two weeks until our fateful game, I expect we'll see a wonderful flurry of posts on this interesting chronicle of the project. I know that over the last three weeks or so I've painted at least 27 French horses. Can't wait to see them all on the tabletop!