The Field of Battle 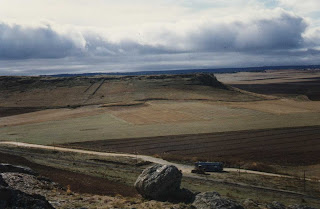 With just under three weeks left until our game at Adepticon I figured I'd show you the progress we've been making on the tables that will make up the 12' x 6 ' battlefield. The photo above is from the south-eastern portion of the actual battlefield. While our fight takes place further north and east, this pic gives you an idea of the relatively featureless field of battle. Anyway, on with the photos. 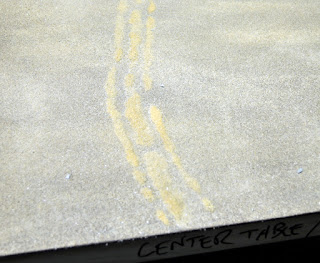 We've put a bit of a cart track down the middle of the table, added to the surface after the original glued sand texture had dried. To add this track we simply dribbled globs of wood glue onto the table in three thin lines then sprinkled another layer of sand over it. 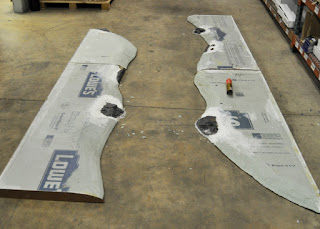 In the original battle, Foy's Division (French) and the Guards Division (British) basically stared at each other across a valley from the crests of two ridgelines (until Foy's Division was called on to cover the retreat of the main French army). Above are the WIP shots of the two ridgelines laid out on the floor of the Battlefront US warehouse. 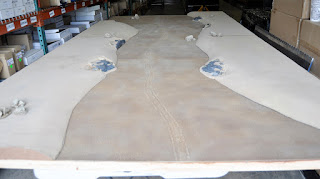 Here are the same ridgelines, after being sanded, laying on top of the three 6' x 4' tables, which have been drybrush to match our basing scheme. 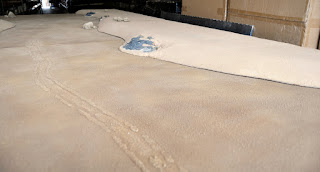 Relatively flat and featureless, our table will end up with a few more rocky outcrops and some appropriate flock and tufts of grass. 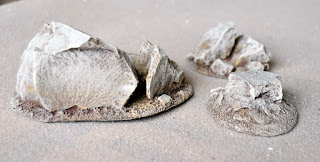 And here's a sample of our rocky outcrops.

Our thanks to those that have worked on the tables: Joe Krone, Brien Dulaney, and Becky
& Heath Alexander!