And with that, the game was over...

So, after all this planning, painting, travelling, building, and a bit of drinking, the first project of our little group has come to fruition. The 2012 200th Anniversary "What if?" Salamanca battle went off very smoothly, and to a very appreciative group of onlookers and passers by. Here are a quick(ish) batch of photos from the game. More detail will follow once we get some sleep and take some better photos. 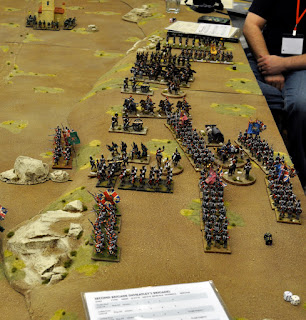 From the start, the British column was up against it as we struggled with our command rolls. From failures to complete blunders, our initial strategy was in tatters from the start. 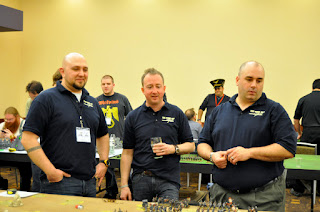 Not wanting to gloat too early, the French commanders attempt to hide their mirth at our plight. 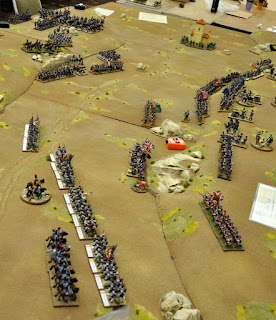 By the time we were able to form a credible defensive line, the French second brigade was racing across the northern portion of the table. 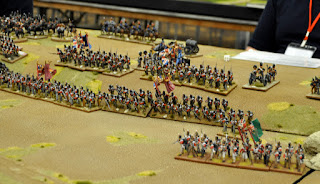 Had this been a straight forward, stand up fight, our Guards battalions would have certainly held the center. 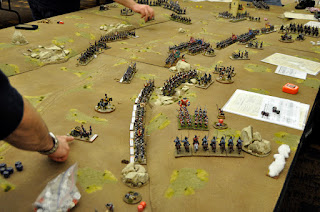 More action at the northern end of the line as the 42nd hastily form square in the face of French Hussars. 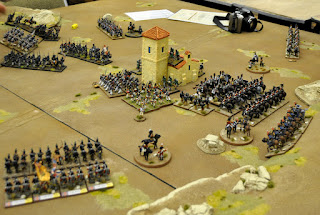 The battle for the chapel was a complete bunfight! All manner of units were trying to unseat the 95th from their loopholes.

With a few jammy rolls towards the end of the game, the French were able to bring three cannon into close range of the 3rd Foot Guards, with another at medium range in enfilade. After 13 shots from artillery, and another three from the Legere to the Guards front. This powerhouse unit was forced to retire 12".

After four hours of hard fighting, and incredibly enthusiastic piss-taking, the game fell to the French. It was determined as "A minor French victory, with no allowance for future French bragging, and no-one owed anyone any beers."

Above are the crew, from left to right: Joe Krone, Chris Ferich, Jamie Welling, Alex Akers, Brien Dulaney, myself, and Dave Pauwels,

There was quite a bit of spirited discussion following the game, and the results were:
a) This event had been a roaring success, despite never setting indicators for success, and
b) We'll be tackling some part of the Gettysburg battle for our 2013 project (another anniversary game of course)!

Cheers
Dave
Posted by davetaylor at 7:13 AM