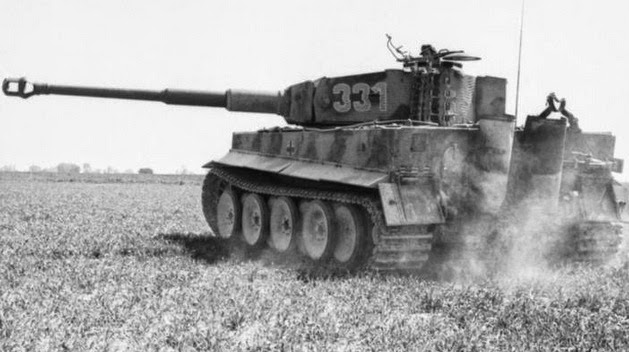 The Battle That Never Was

After much planning and work on those of us involved real life took over and forced us to cancel our planned Battle of Marston Moor game.  So instead, we took the opportunity to recreate some of the more relaxing elements of the English Civil War. 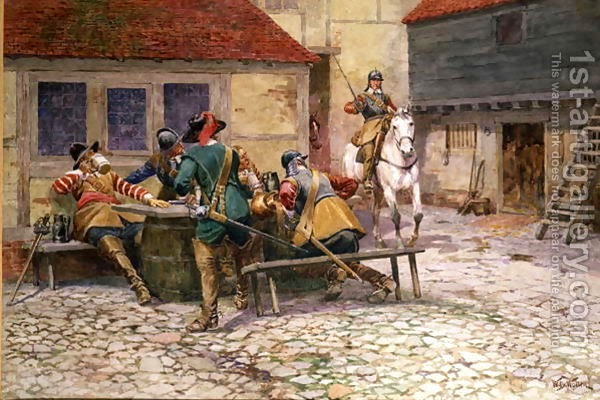 Rest assured though, we have plans to do this battle next year at Adepticon.  In addition, our hope is to make this a participation game so that people can join in on the fun.  Stay tuned to this blog for details as they become available.

In the meantime, check back for some exciting news about a new exhibition game we have in the works.
Posted by Jamie at 5:17 AM 12 comments: 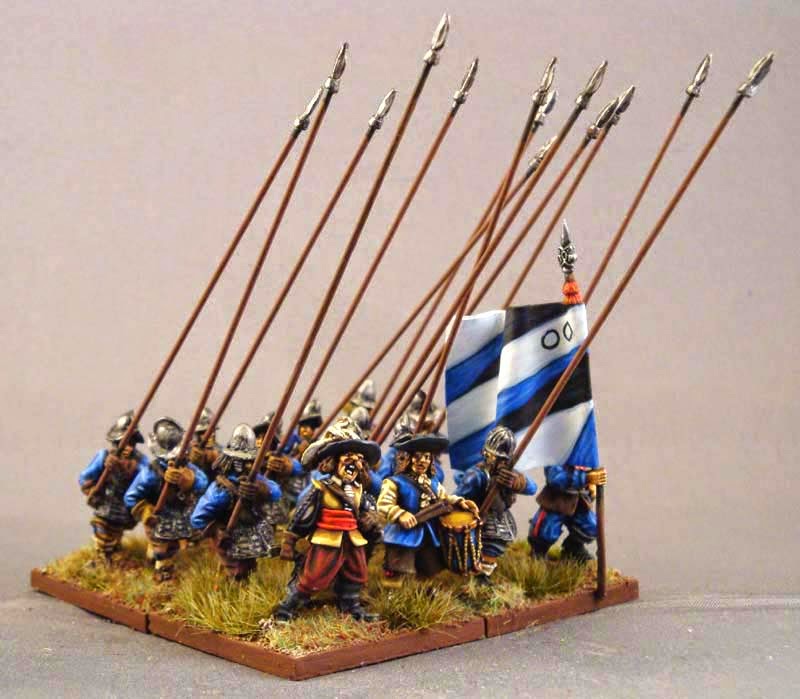 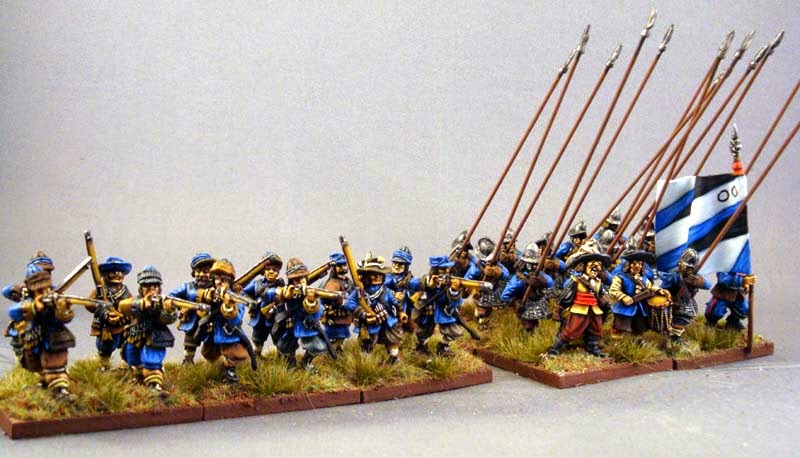 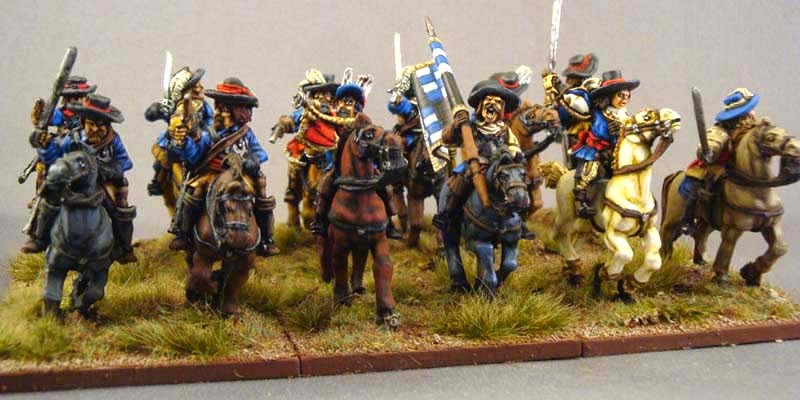 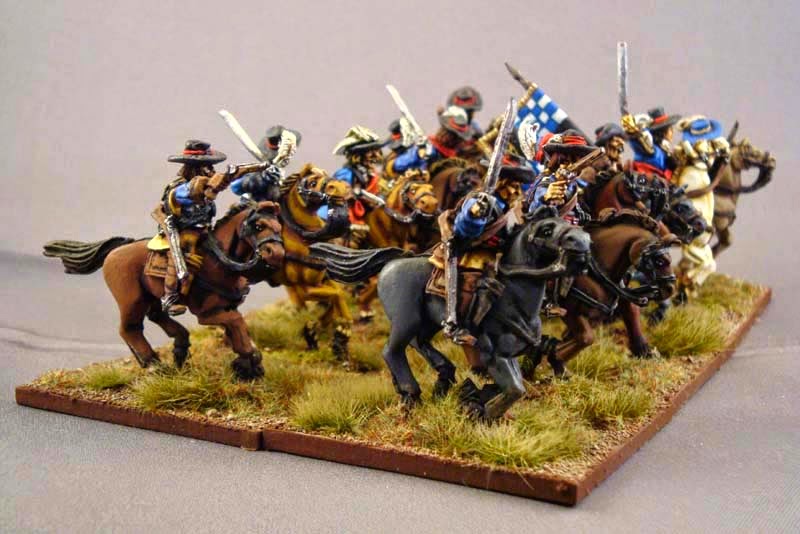 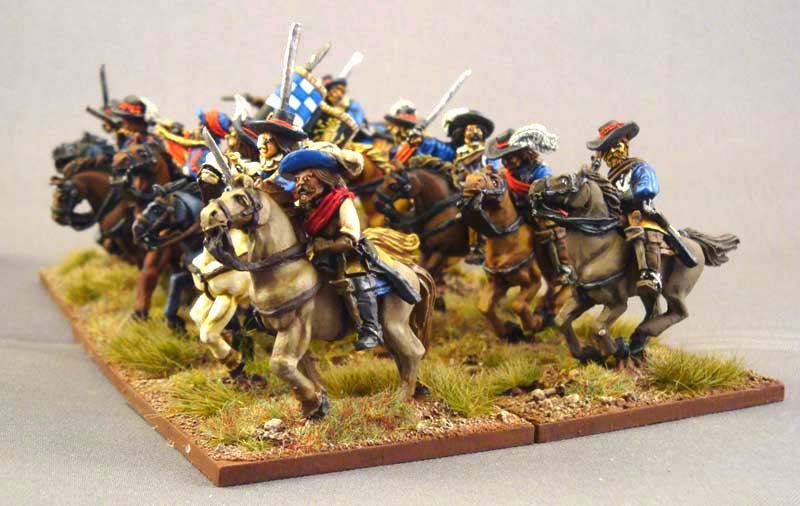 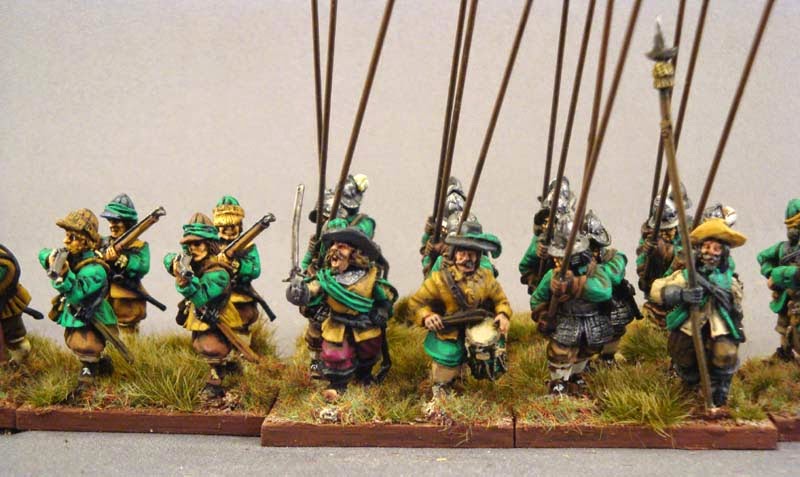 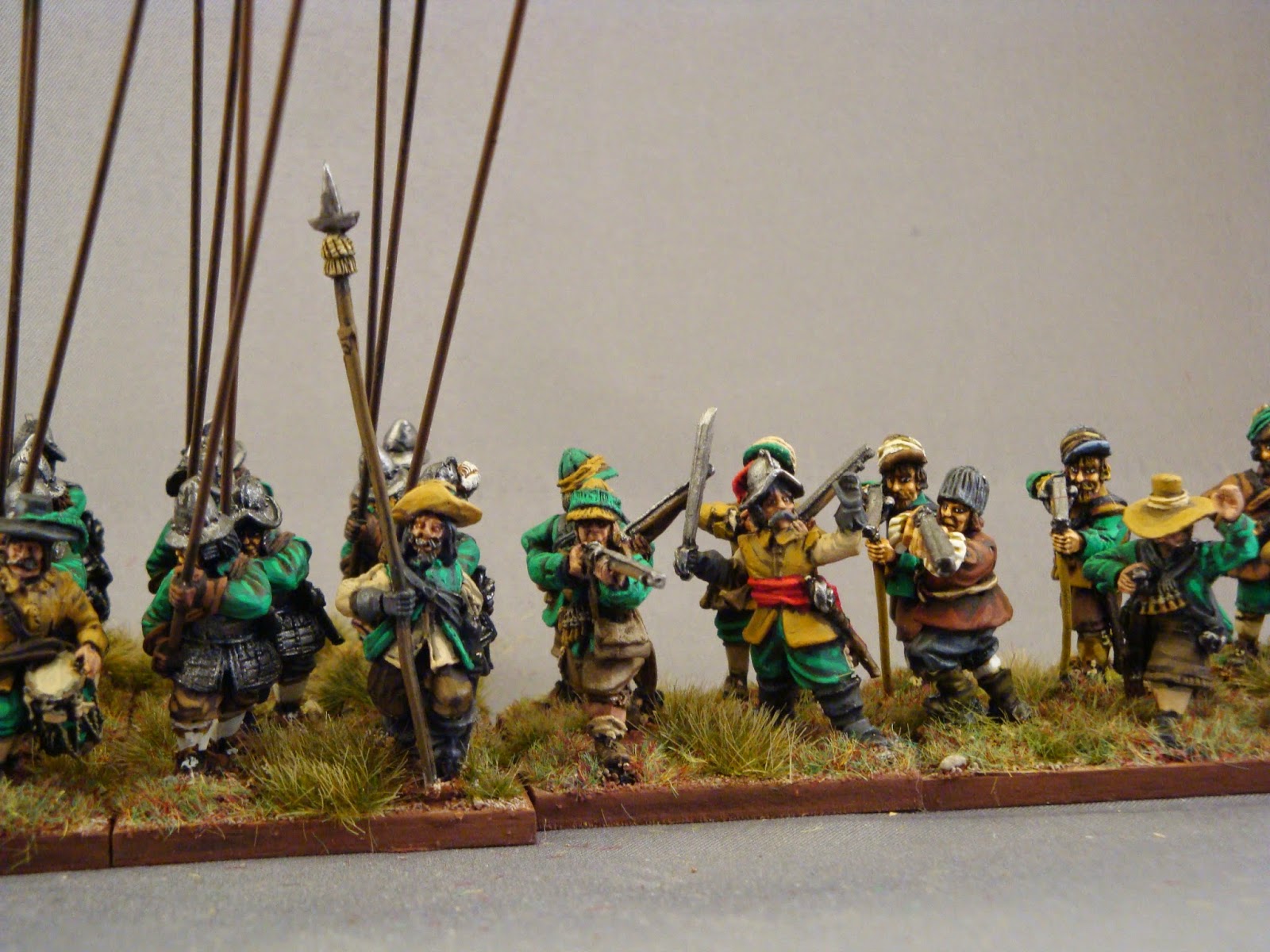 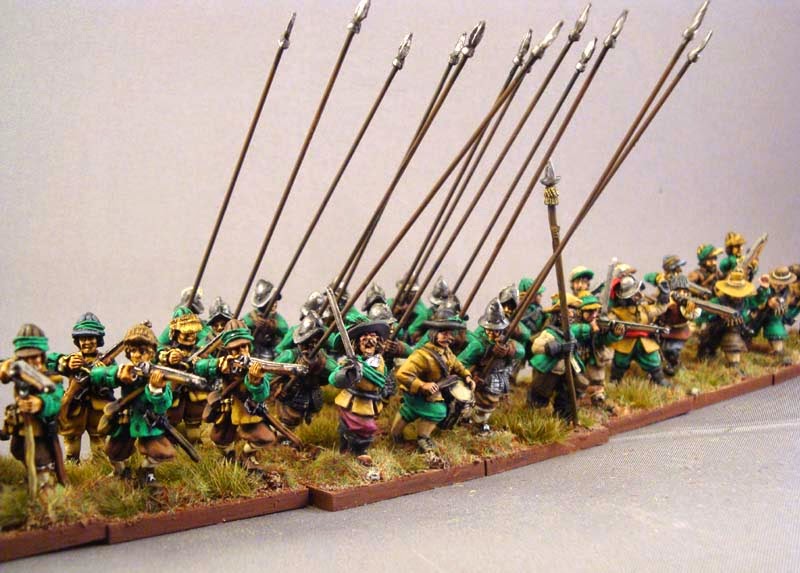 For King and Country

I was very disappointed about missing Adepticon in 2014 but it was for a very good reason. Now that I am back on schedule I was fully behind our 2015 project representing the English Civil War and the Battle of Marston Moor. I was very eager to defend the righteous King from the upstart Fairfax, Cromwell and the Parliament dogs. This is my first go at collecting and painting an ECW army but one thing I wanted to be sure of was to keep things very simple. My painting responsibility includes the following:

Lots to paint and March is just around the corner. Here is my first progress report. I am base coating my army, giving them a wash of the Army Painter 'dip', and hitting them with a dull coat. If I have time I will go back in and give them a highlight but overall I am happy with the look 'as is'. They won't win any painting competitions but they will look fine on the table.

I came to our game at Adepticon 2014, ready to discuss ideas for our 2015 event.  I had already mentioned to the group my own interest in the English Civil War, but assumed it wouldn't hold much interest for others, as I haven't encountered a lot of folks who game the period.  Yet, I was pleasantly surprised to find many in our group to be fans of the period and others more than willing to give it a go.

So, 2015 will see us recreate The Battle of Marston Moor in 28mm.  For me, I couldn't be more excited.  ECW was my first foray into historical miniature gaming and probably due to that, it has always been a favorite period for me.

So, stay tuned as we bring you updates of the groups progress as well as more information on the period and the battle itself.  And of course, check out the finished project at Adepticon 2015!

The Battle of Marston Moor 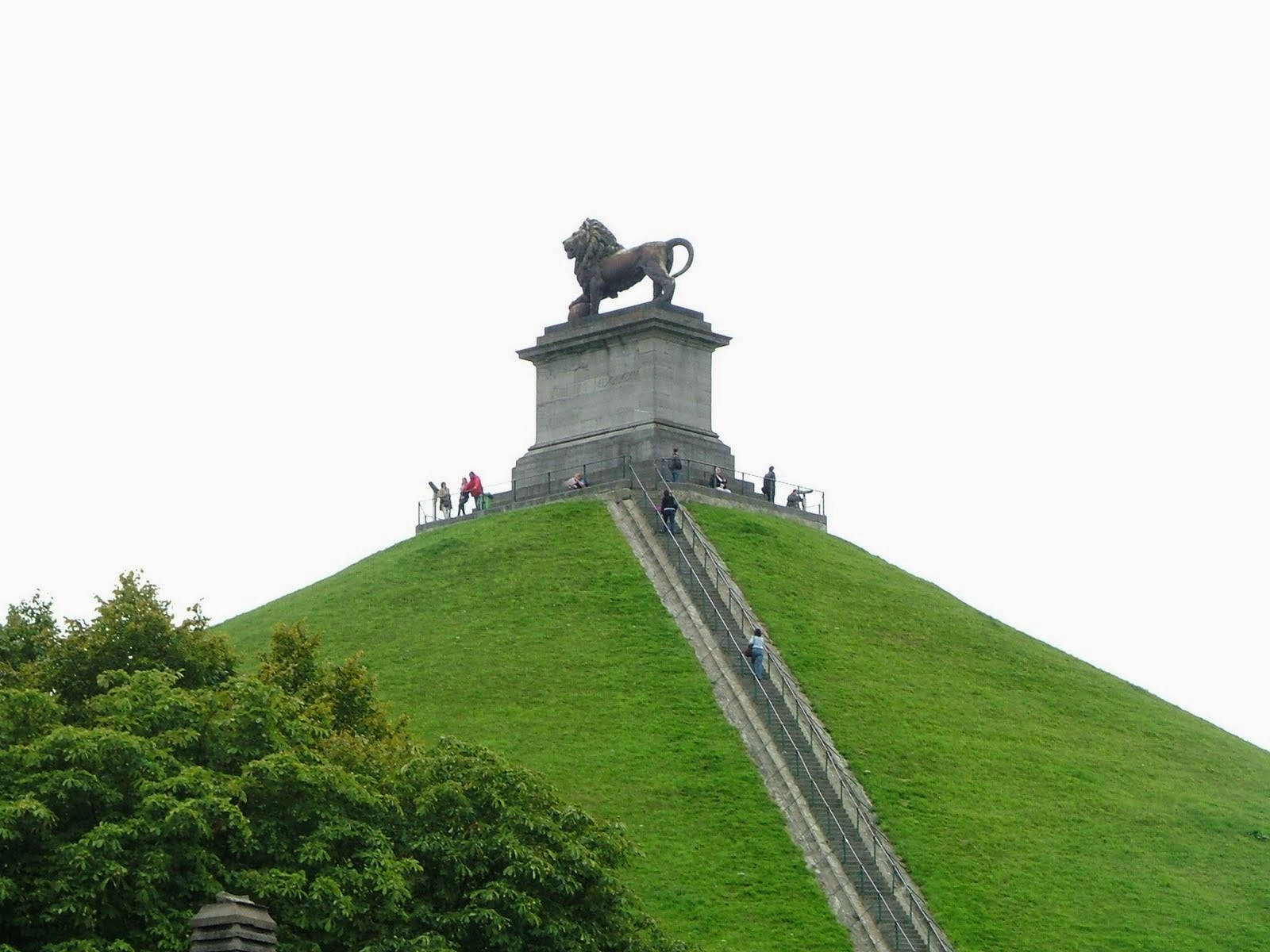 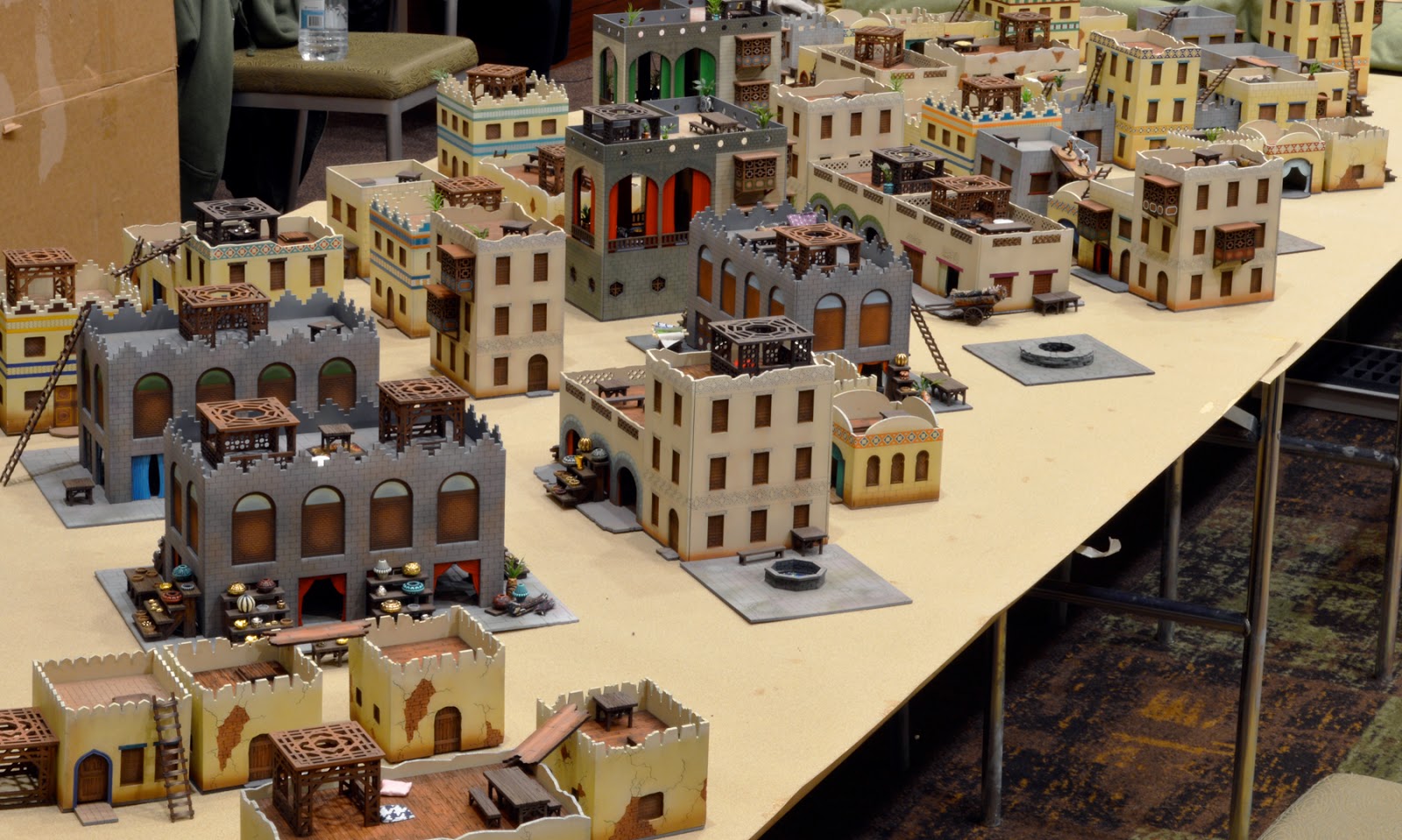 My most humble apologies for not posting this sooner, but life has a way of being hectic when you least need it to be. But anyway, on to THE blog post about our Guns of April game at AdeptiCon 2014.

As we infrequently posted before the event, we chose to tackle a skirmish project for this year. Something that I feel was a double-edged sword. By electing to have everyone only paint 10-12 models (after our 120-150 model efforts the last few years) we could cut everyone's preparation time considerably, but this also meant that there wasn't that big rush of excitement as massive armies neared completion. Additionally, when you zoom in on skirmish action you must dial up the detail of the terrain. Our previous efforts (Salamanca 1812 and Gettysburg 1863) were relatively sparse on terrain, but I had a vision for Alexandria 1801 that I really wanted to see come to life. This meant that Alex Landing, Rob Chandler, and I had loads of work to do to pull it off successfully. When this crunch time  arrived, we were simply too busy doing that we had no time to take photos and actively promote a sense of excitement amongst the rest of the team. That's all really a time management issue that we need to keep an eye on for future projects. 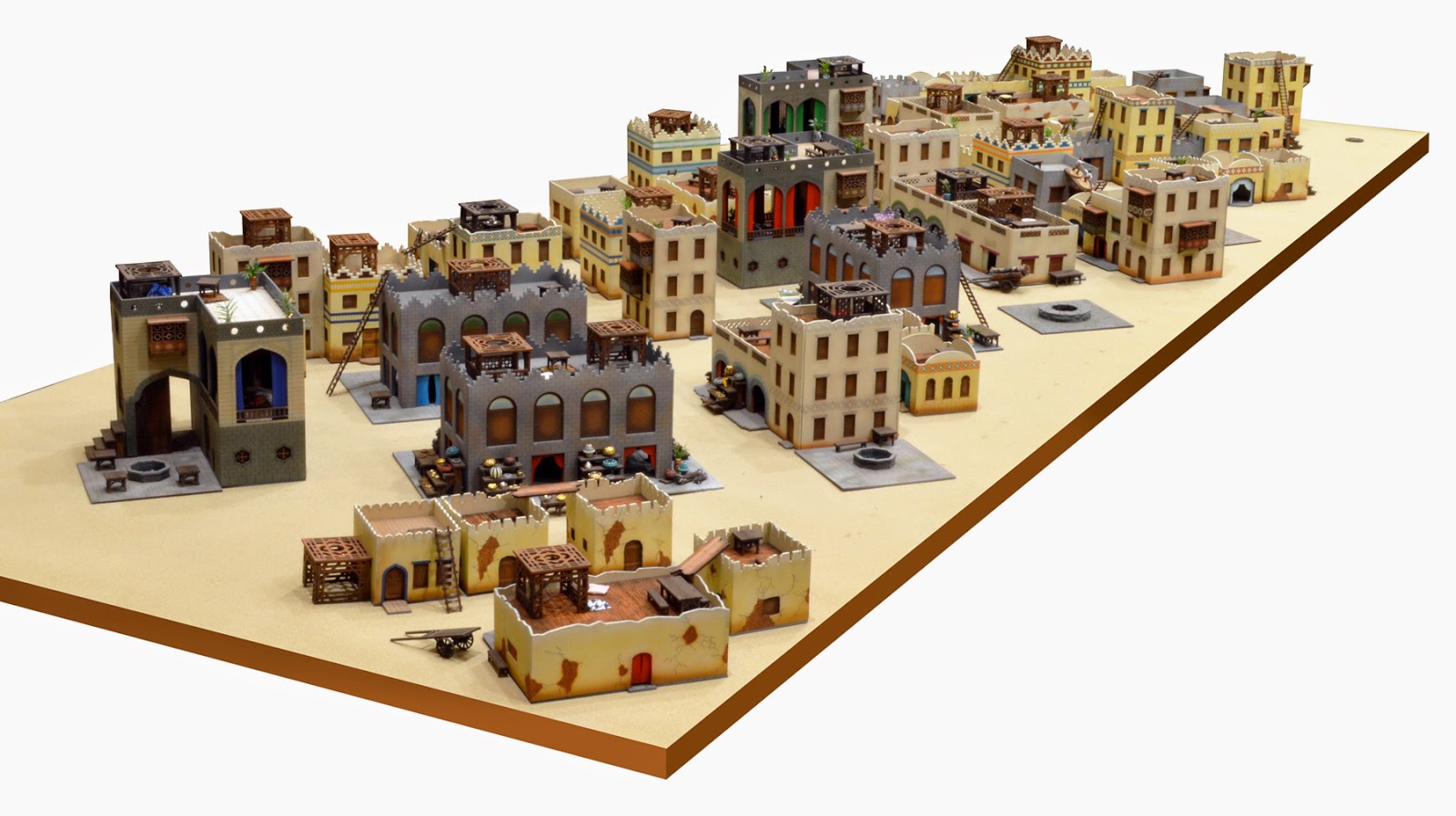 The end result, however, looks absolutely spectacular and completely fits with what I had in mind. I only wish I had taken as much time and care over the gaming preparations as I did the terrain.

Here are some photos from the night, captioned as appropriate. 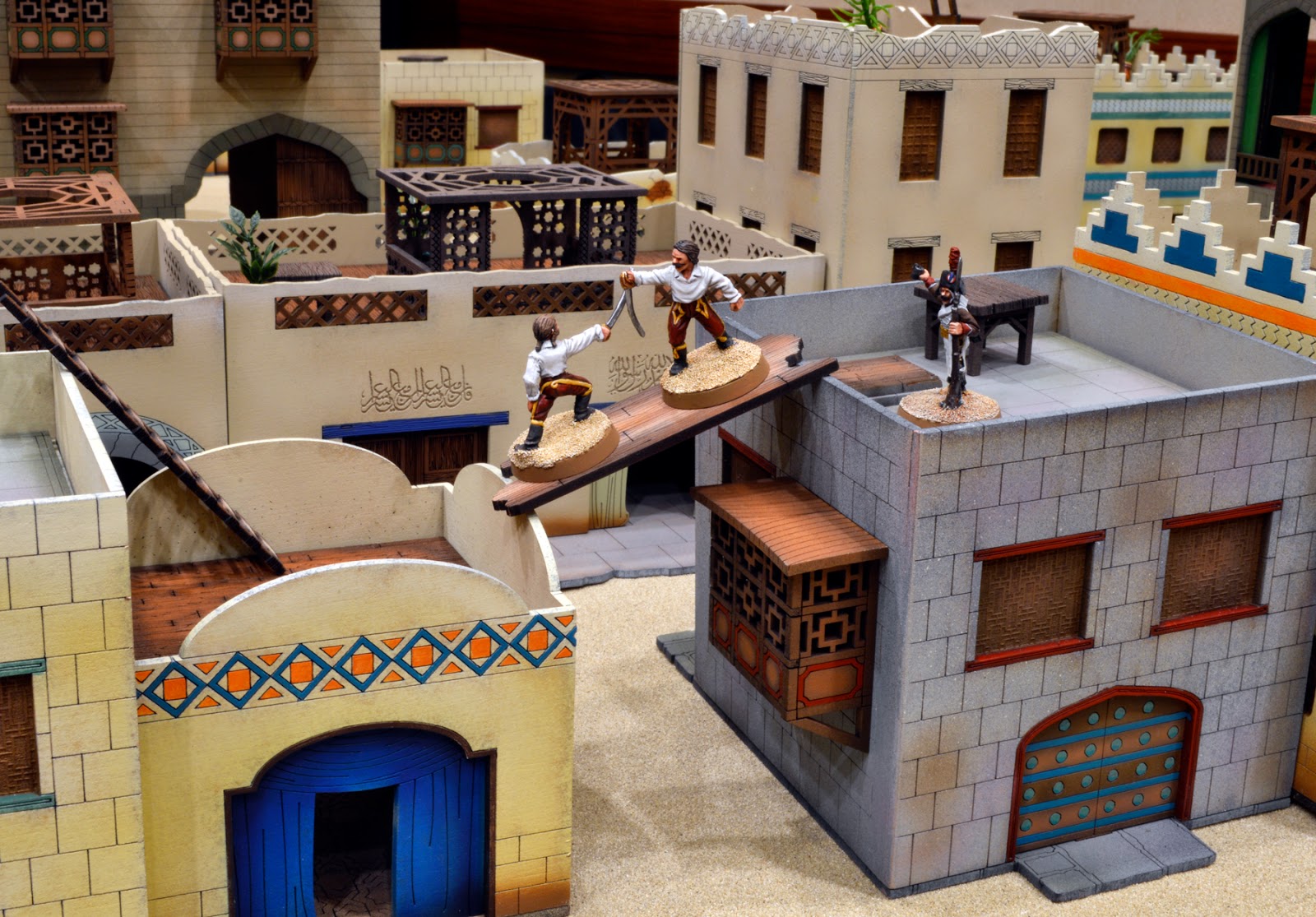 Two French Hussars duel across the rooftops of Alexandria. 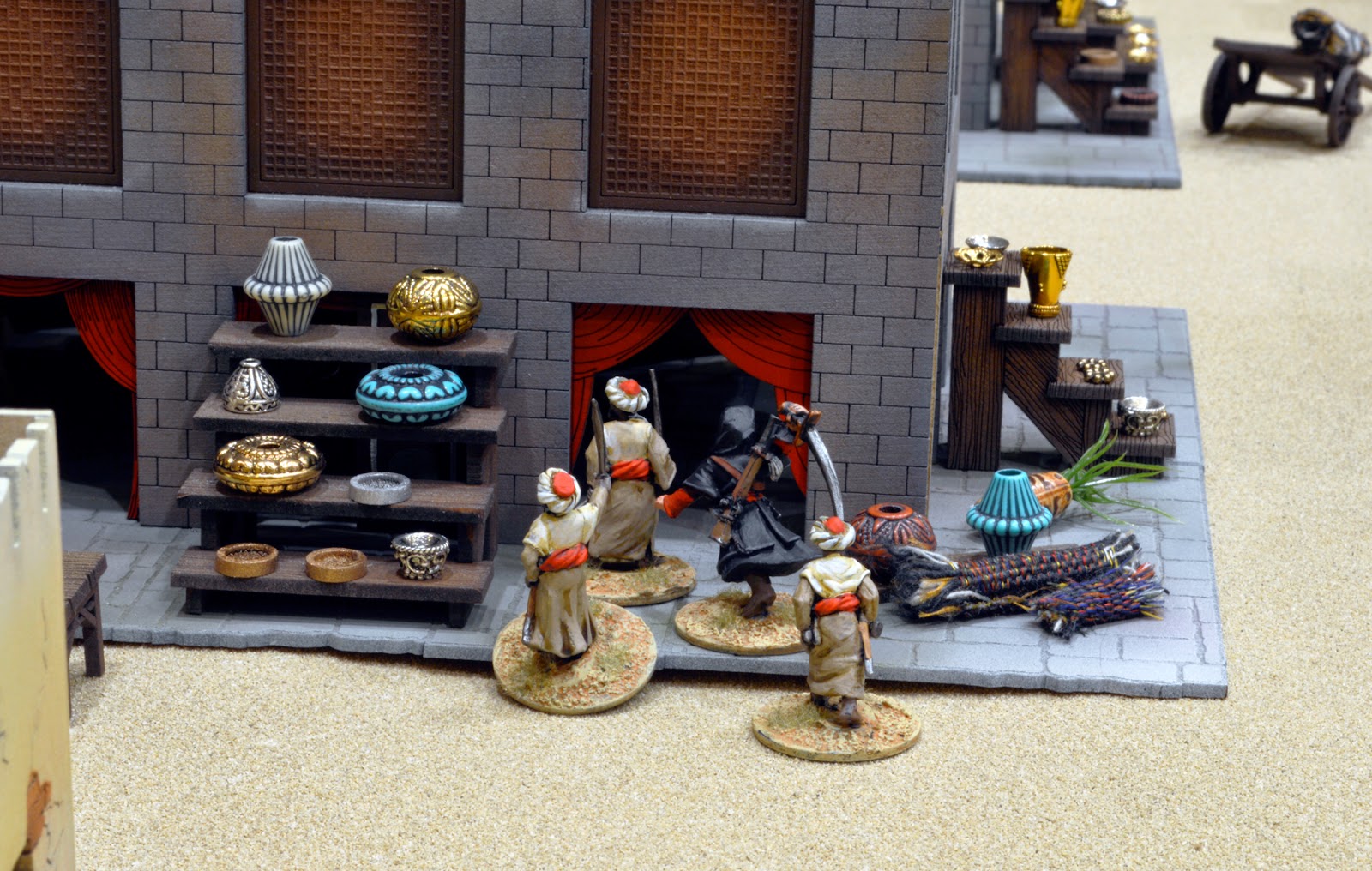 Ottoman Turks (painted by Tim Kulinski) head into a bazaar to combat the French. 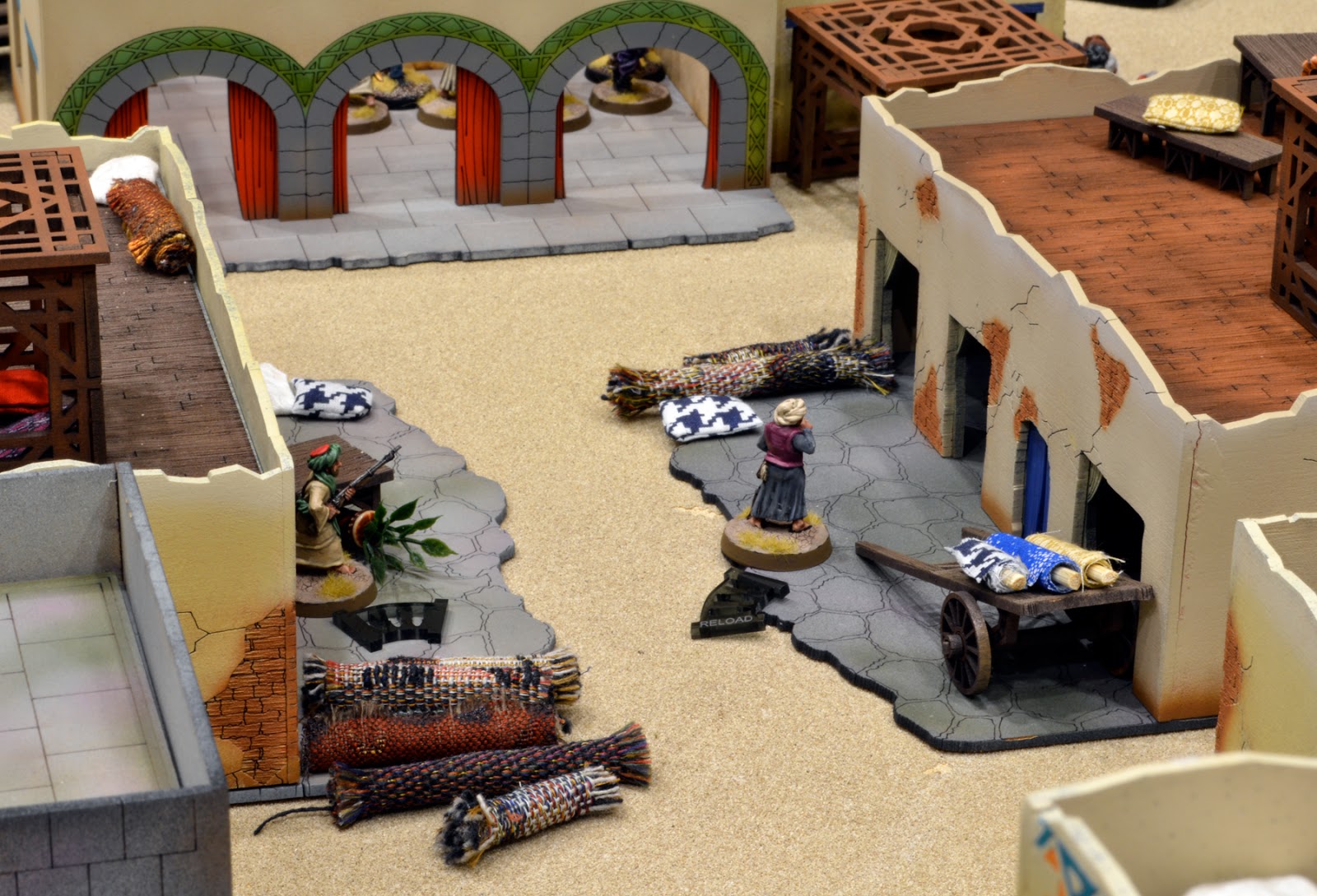 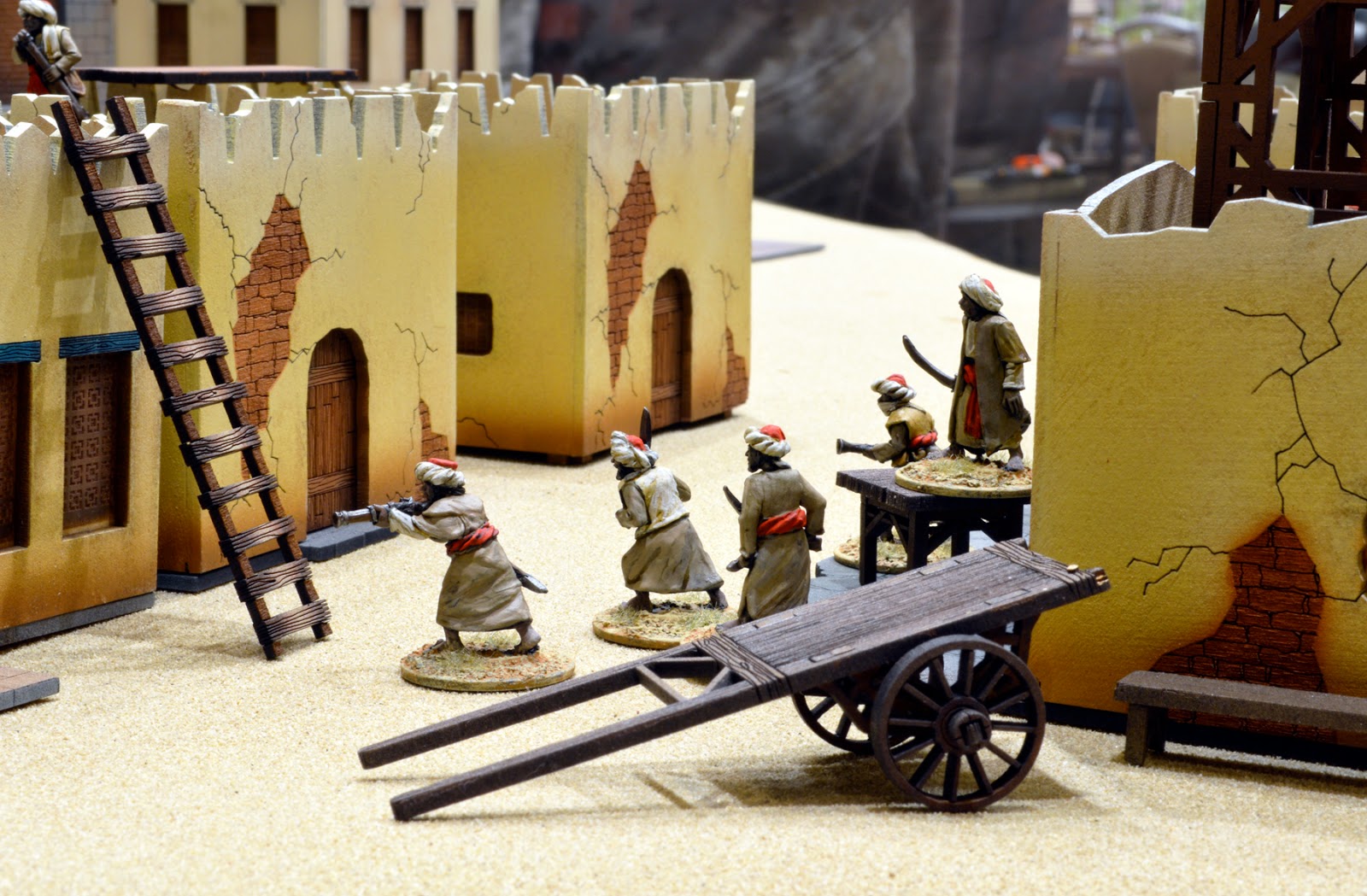 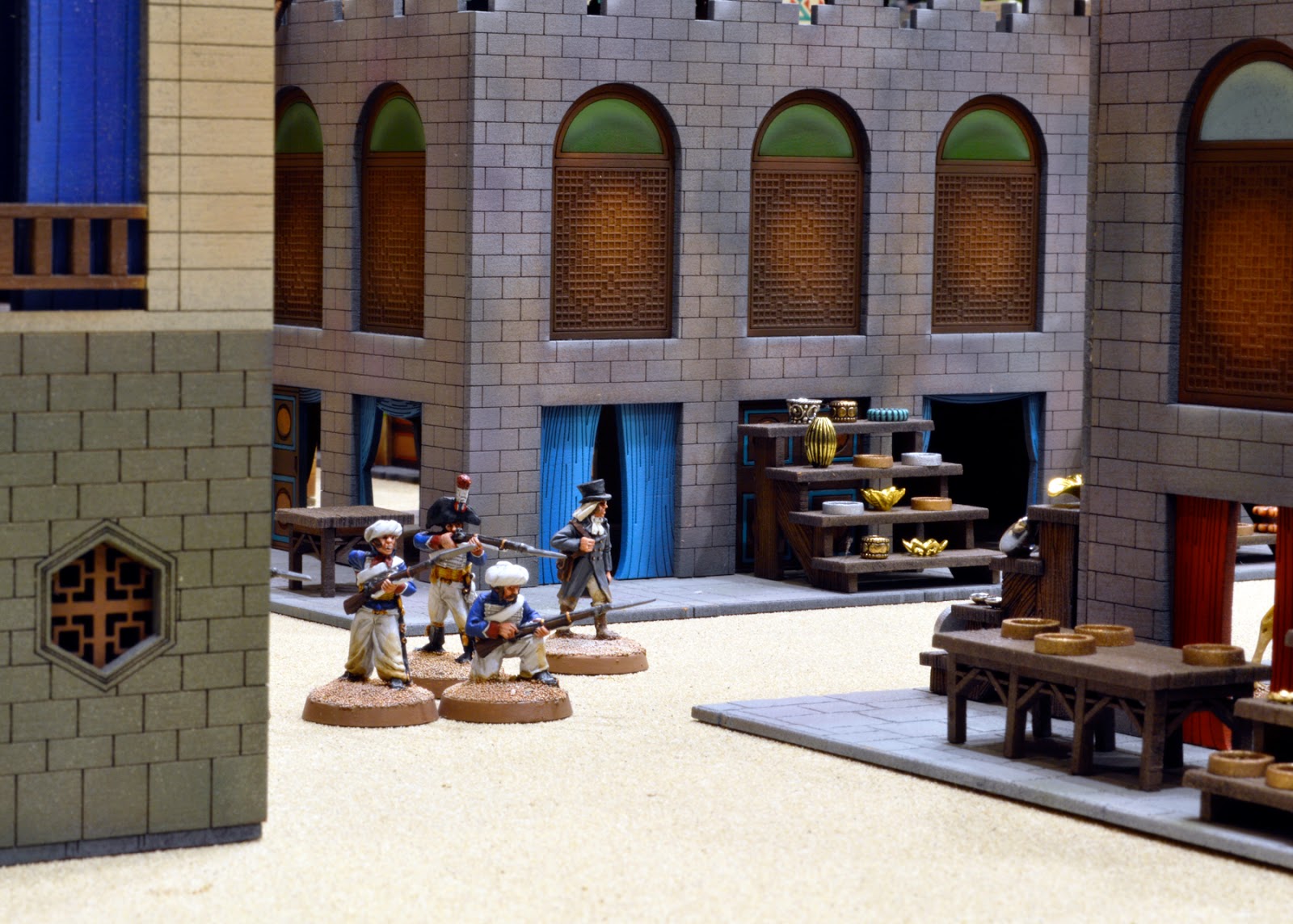 Men of the French Dromedary Corps (painted by me) prepare for a firefight. 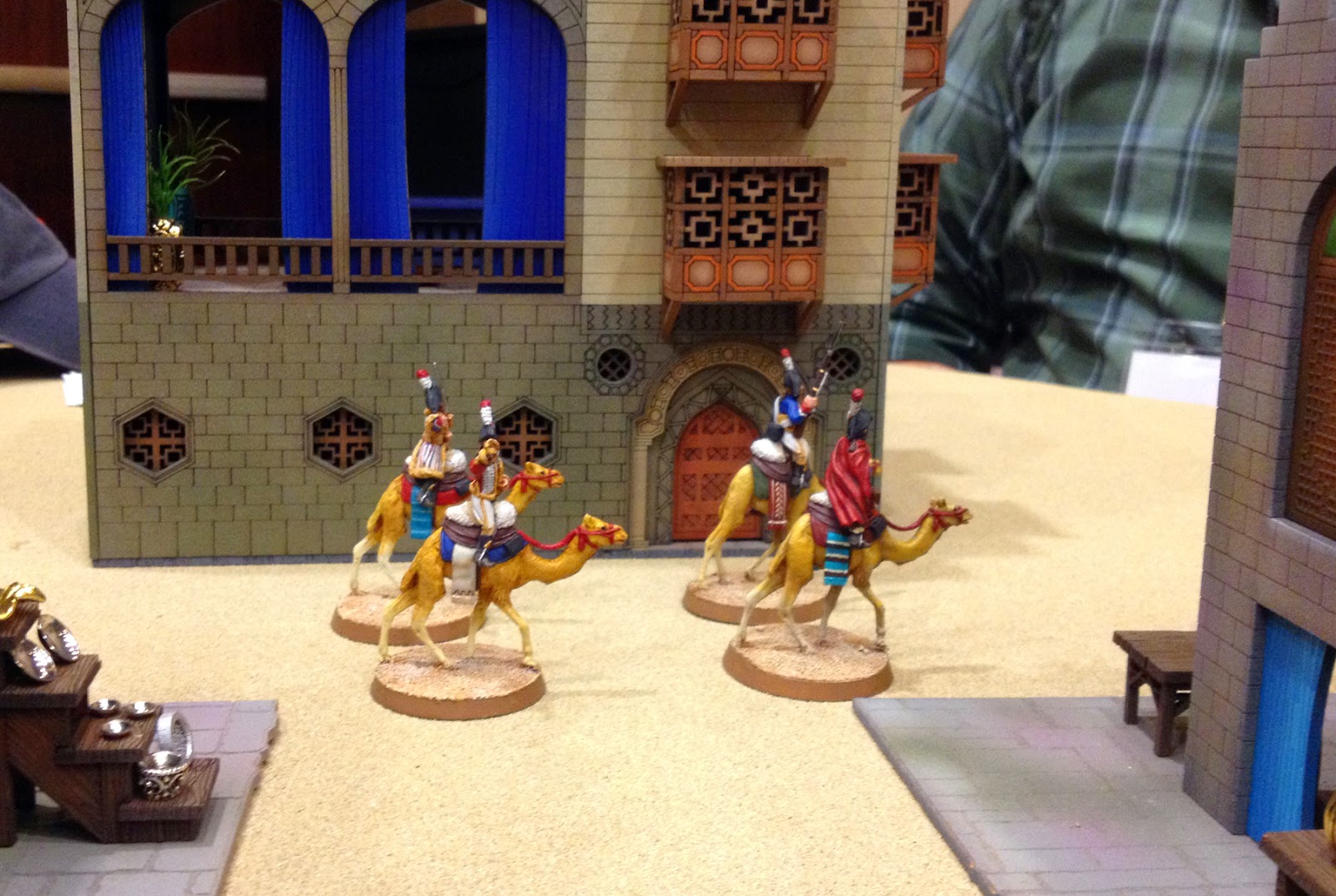 The French Dromedary Corps (painted by me) lope forward in front of the mansion of a wealthy merchant. 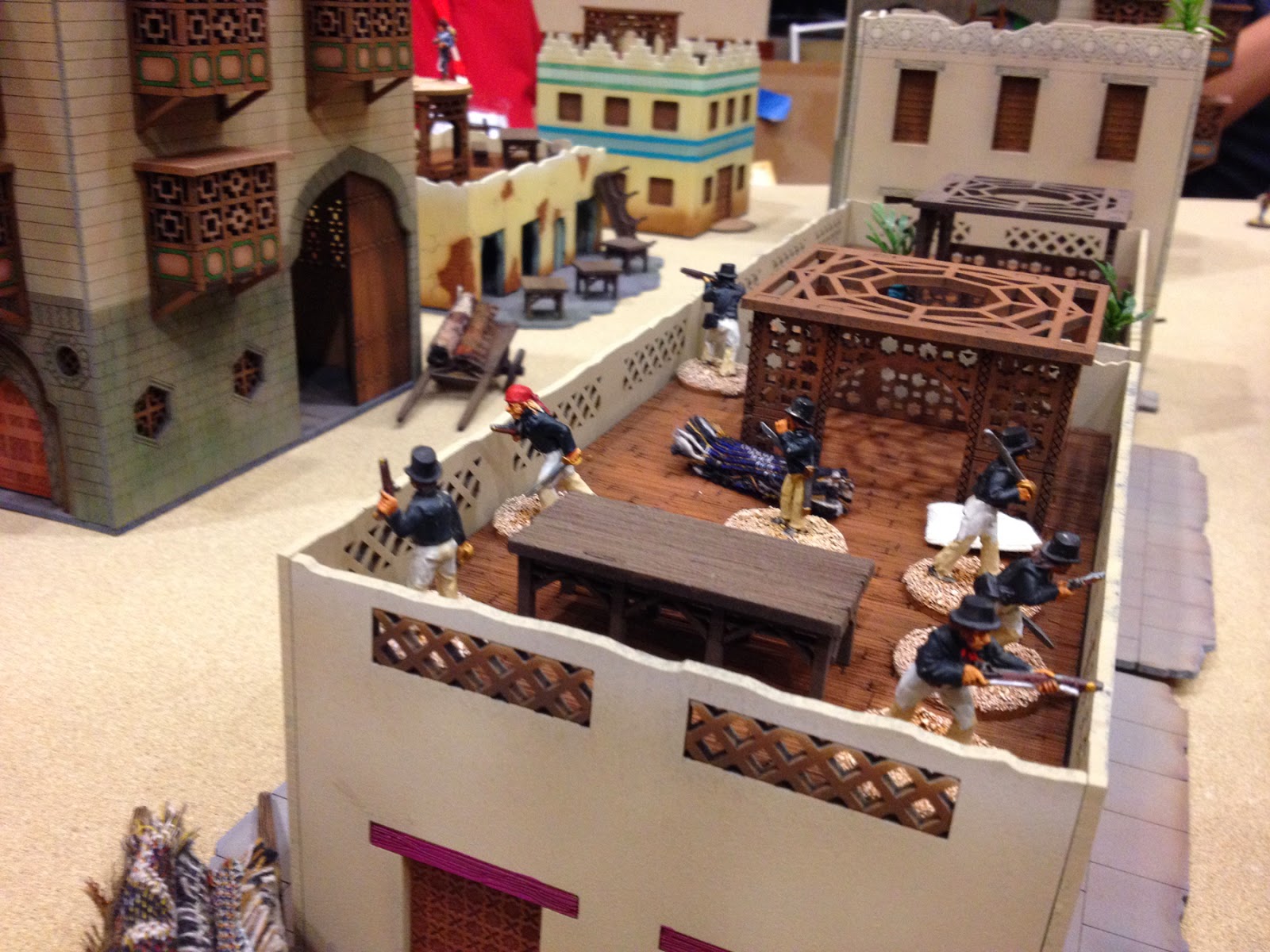 Crewman from the Royal Navy (painted by Rob Chandler) are in place to defend their building. 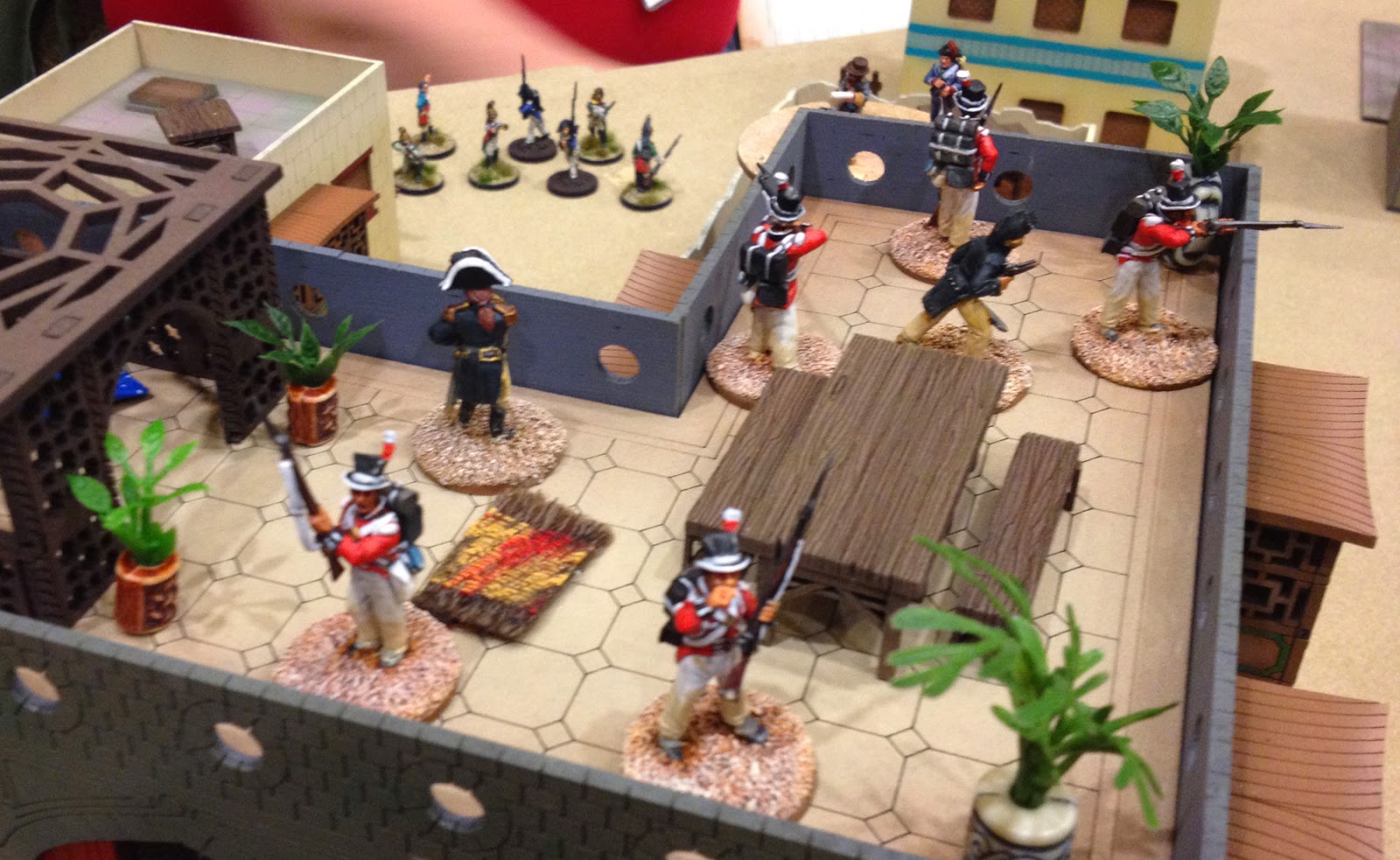 His Majesty's Marines stand atop another mansion (painted by Rob Chandler) waiting for the French to approach. 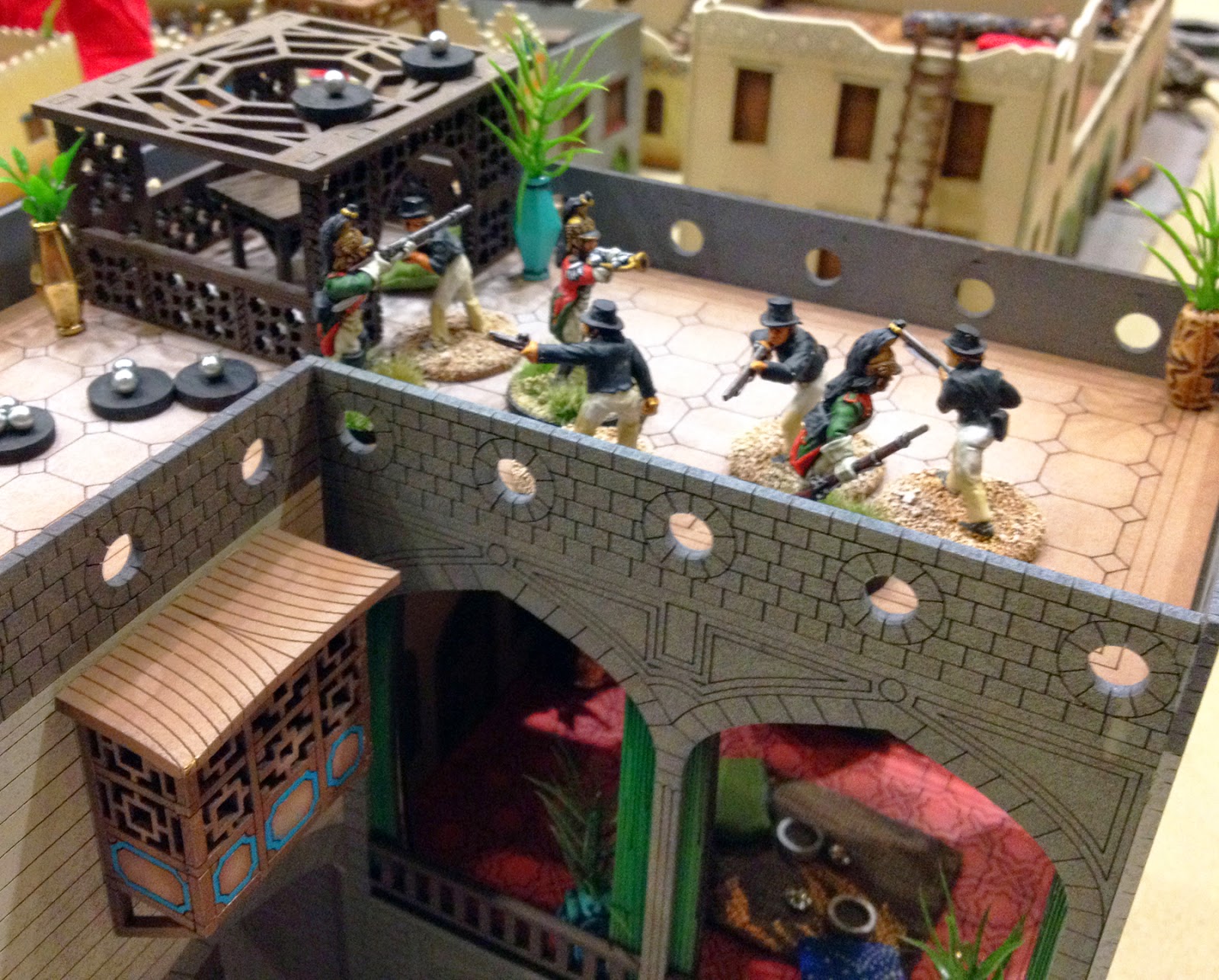 Leaping from balcony to balcony, these French Dragoons (painted by Merle Delinger) rush into combat with the British. 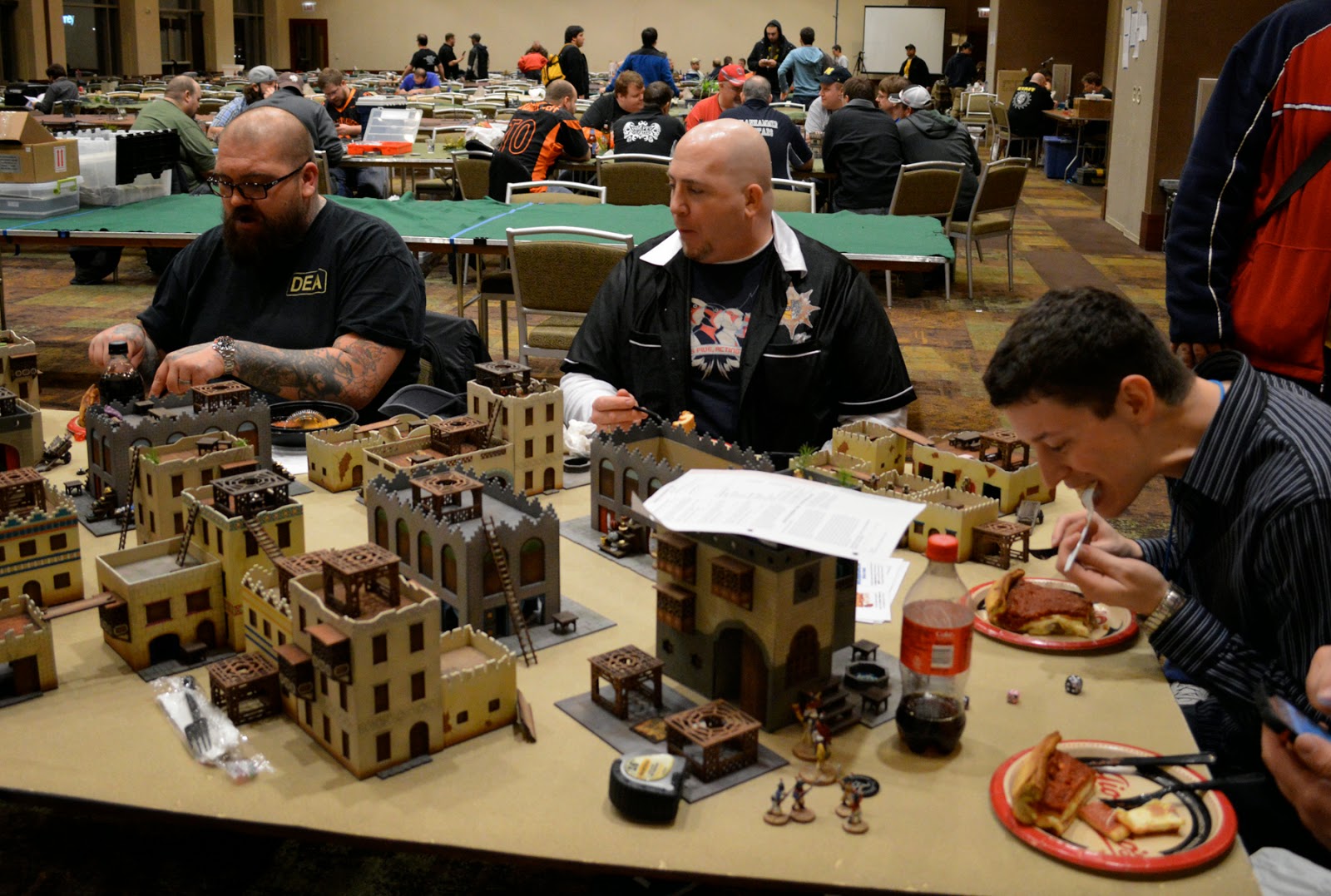 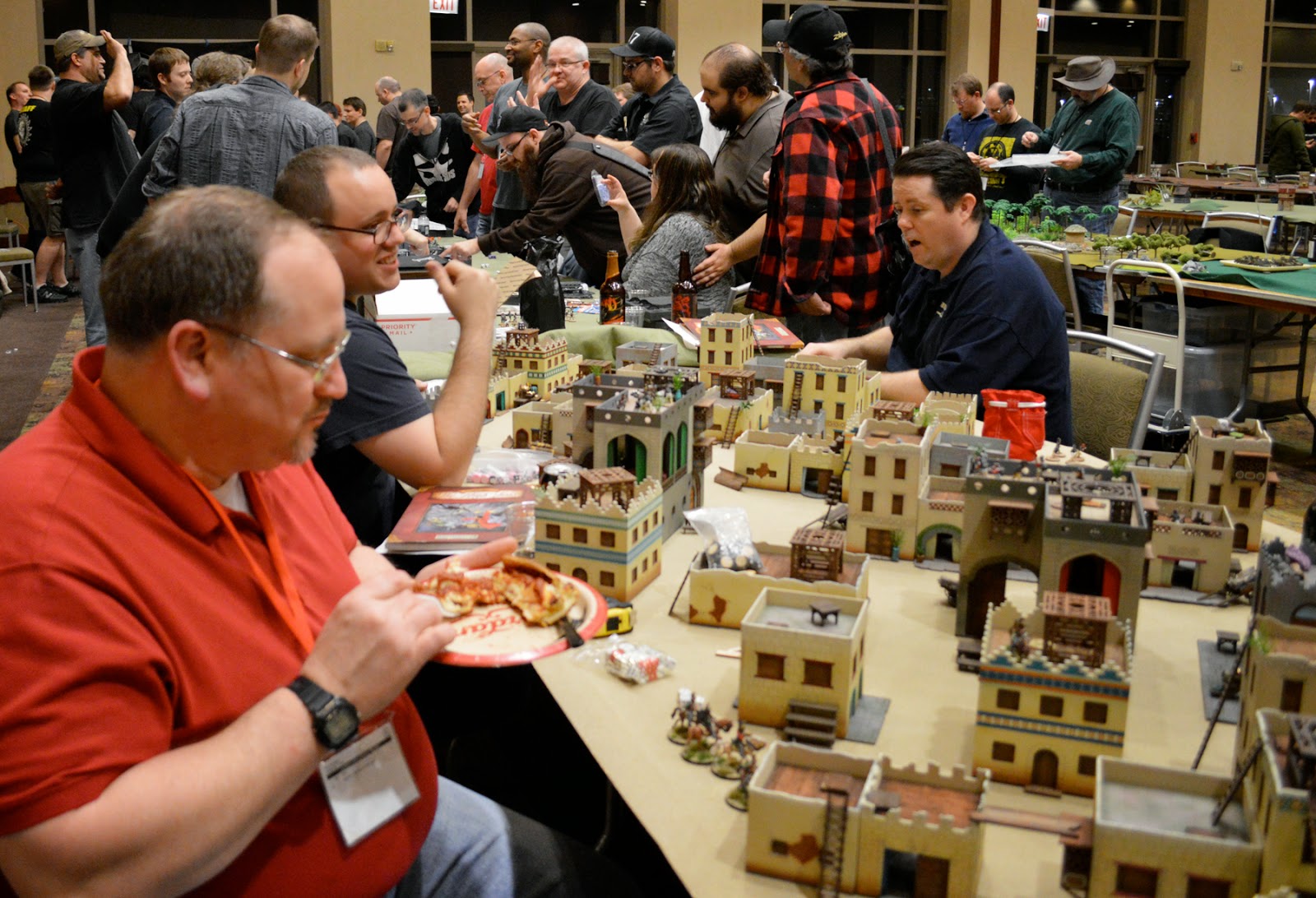 Everyone takes a break for some well-earned Chicago deep dish pizza. 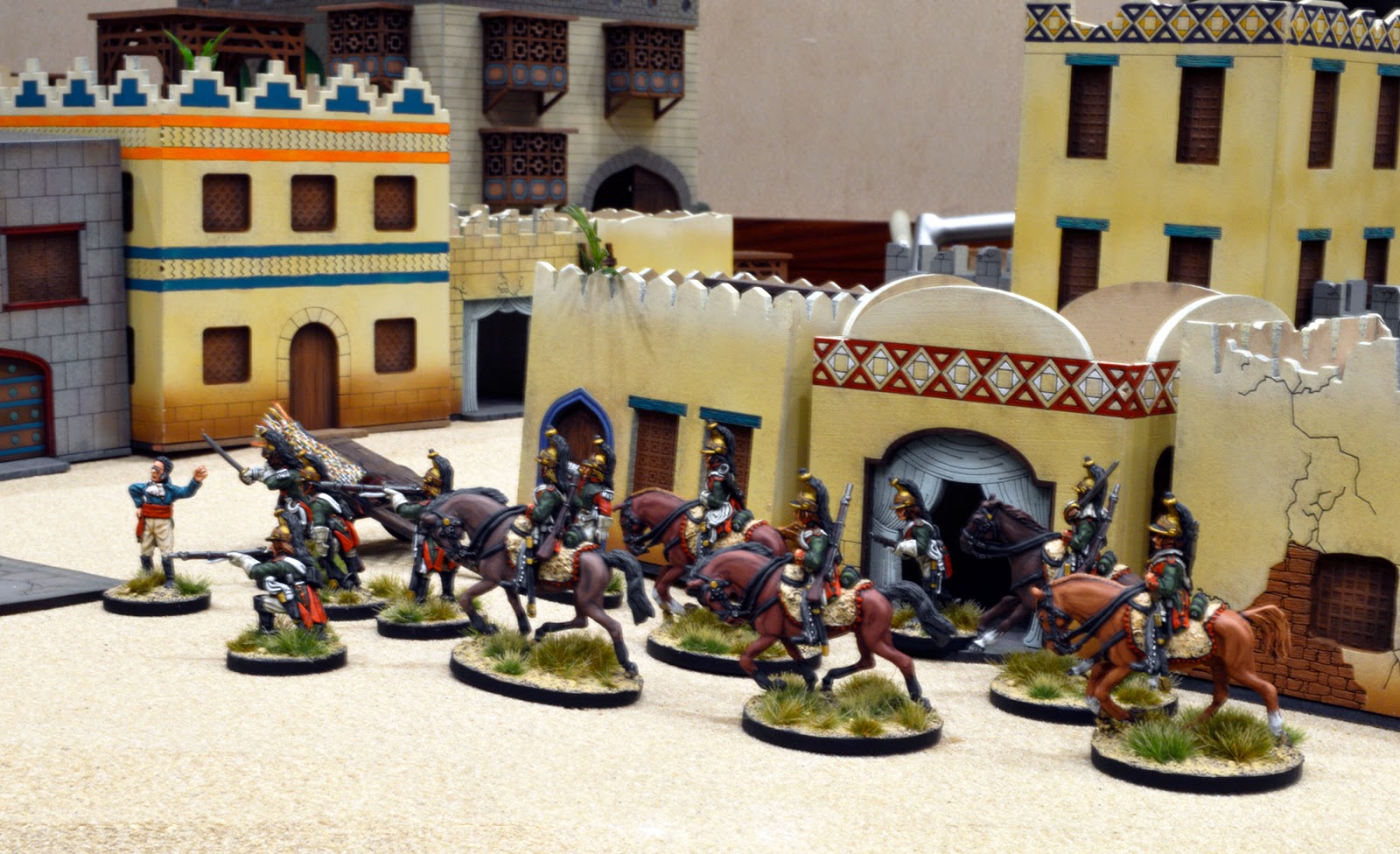 A French Cavalry force of Dragoons, painted by Merle Delinger. 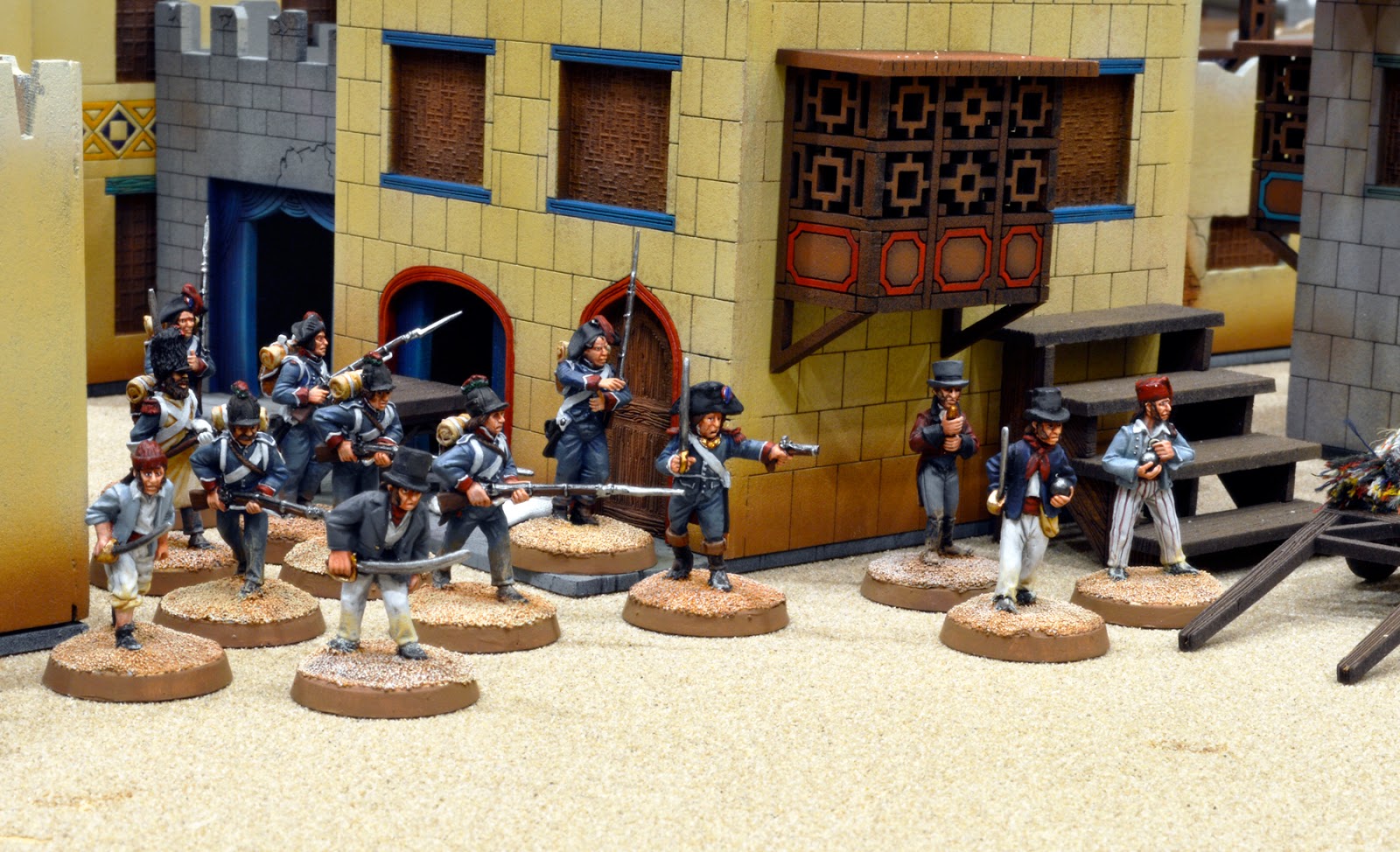 A French Infantry force (from the 22me Demi-Brigade de Legere), painted by me. 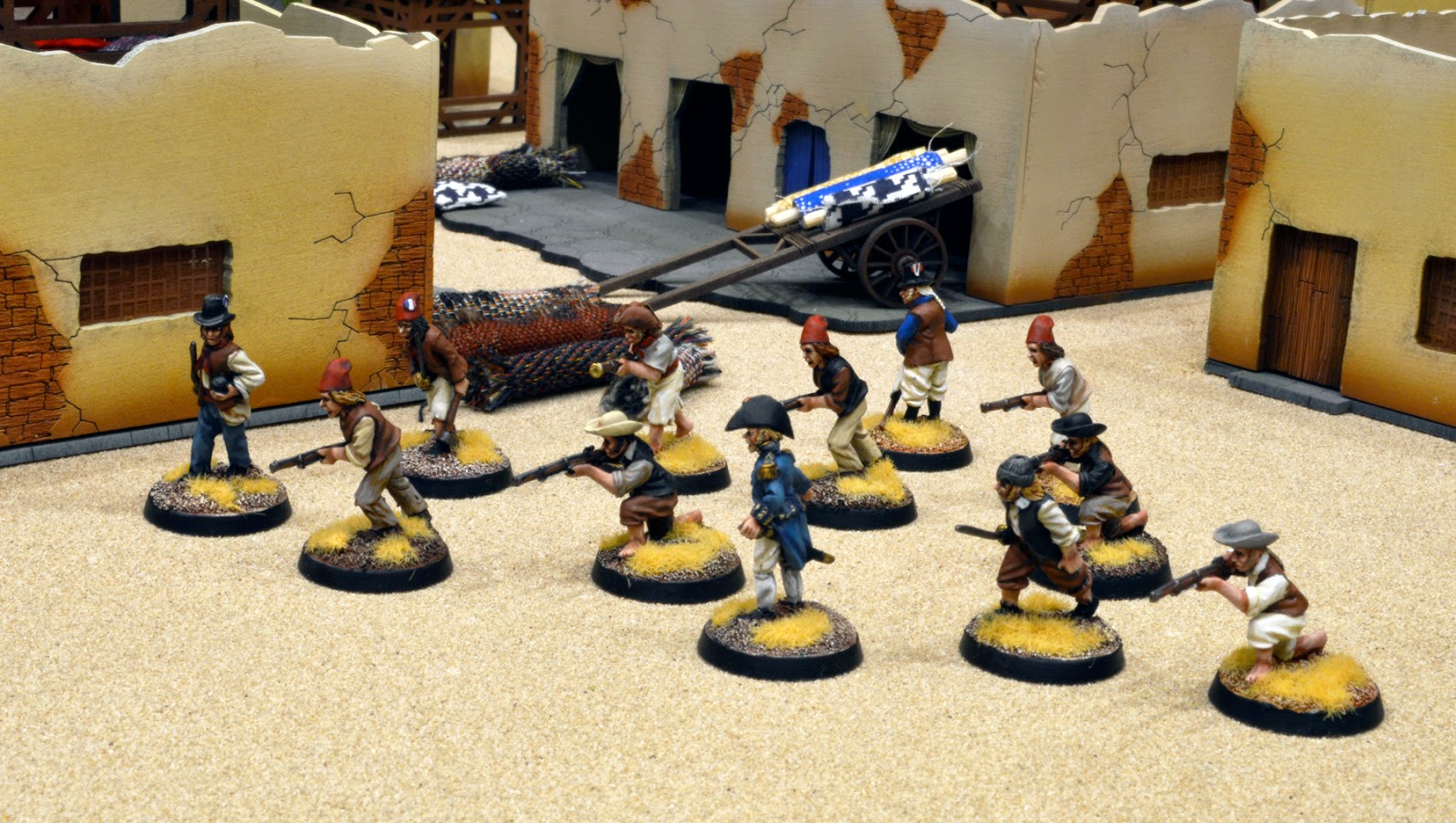 Crewman from the French Navy, painted by Alex Akers. 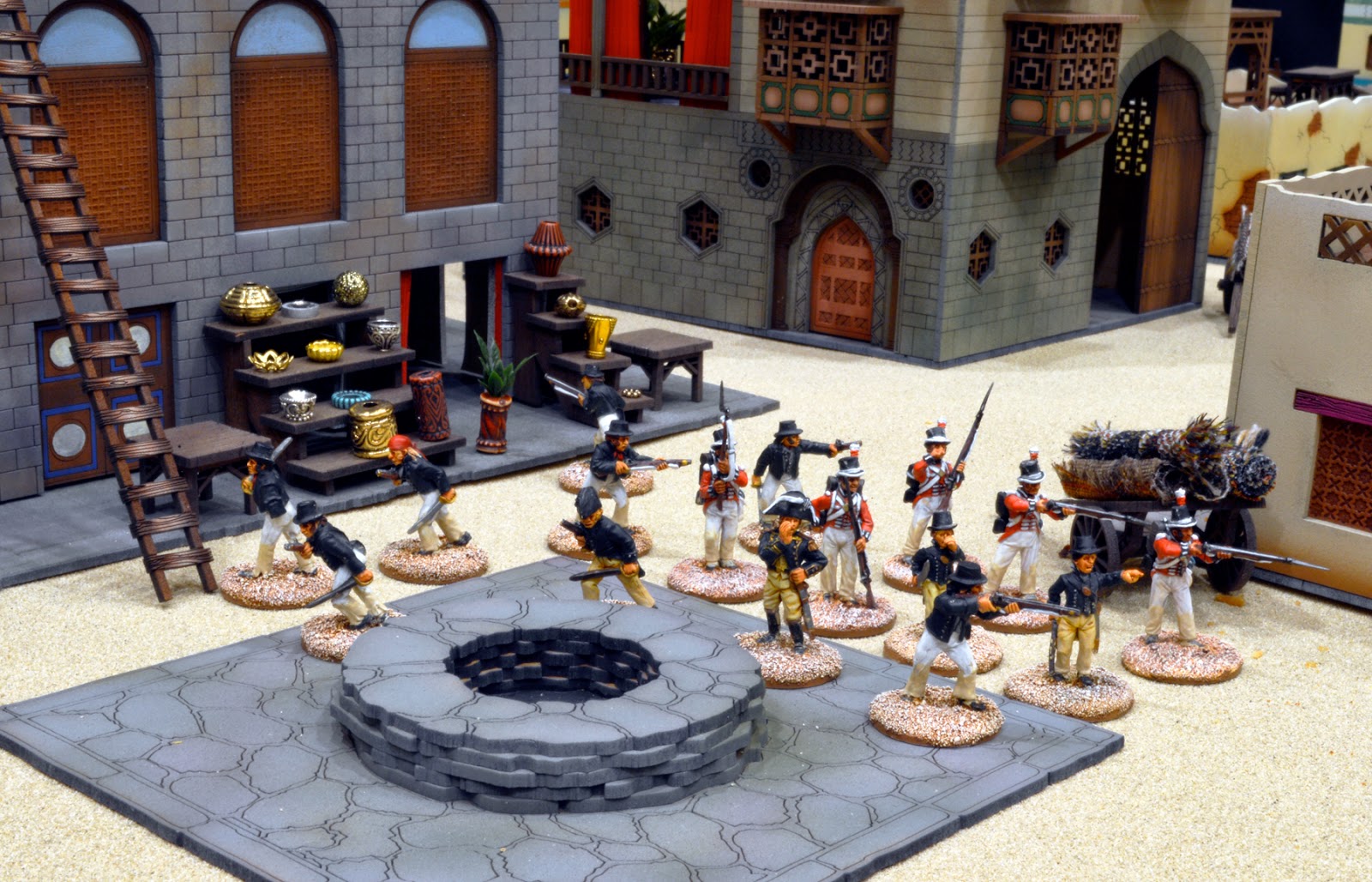 Crewman from the Royal Navy and His Majesty's Marines, painted by Rob Chandler. 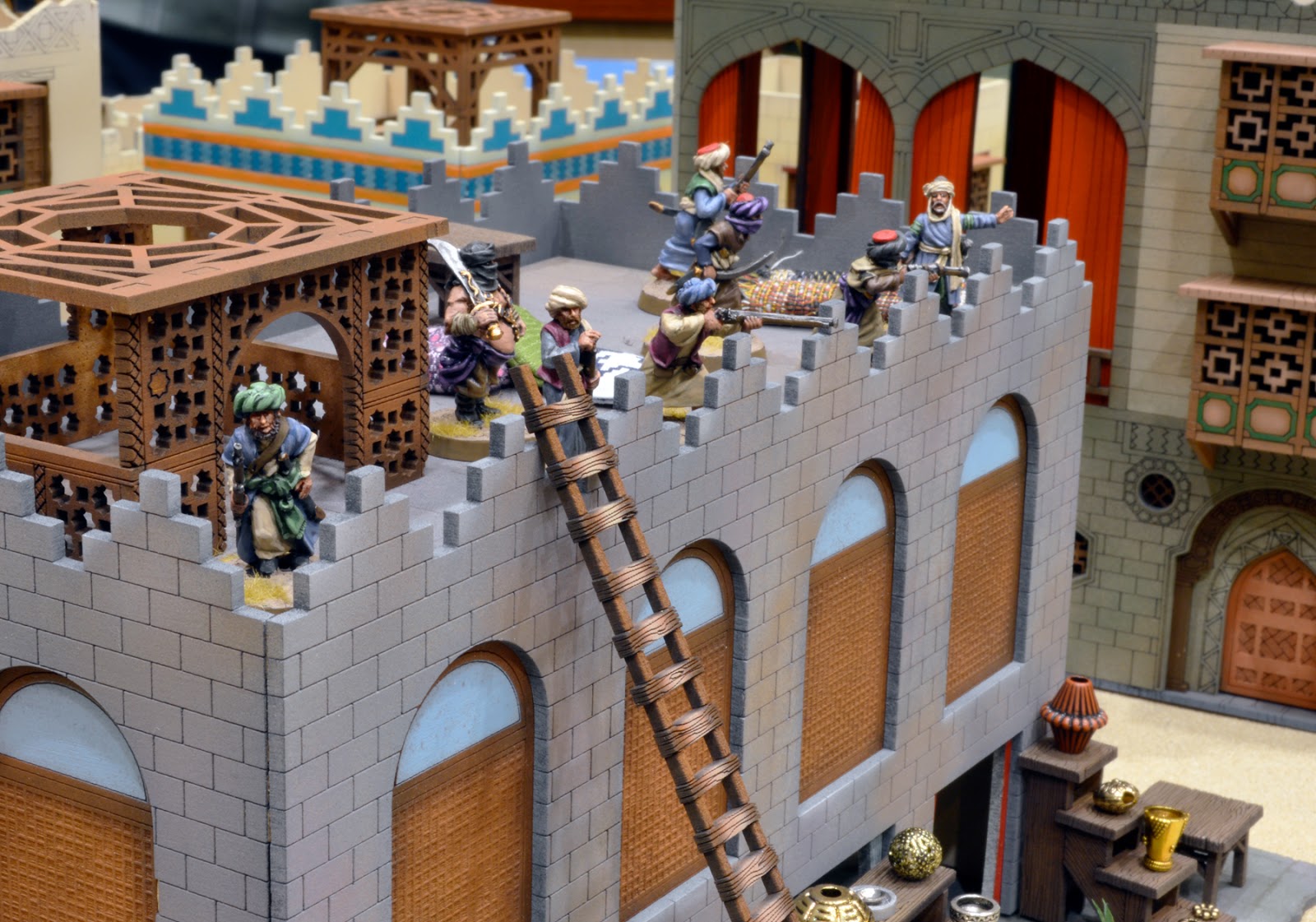 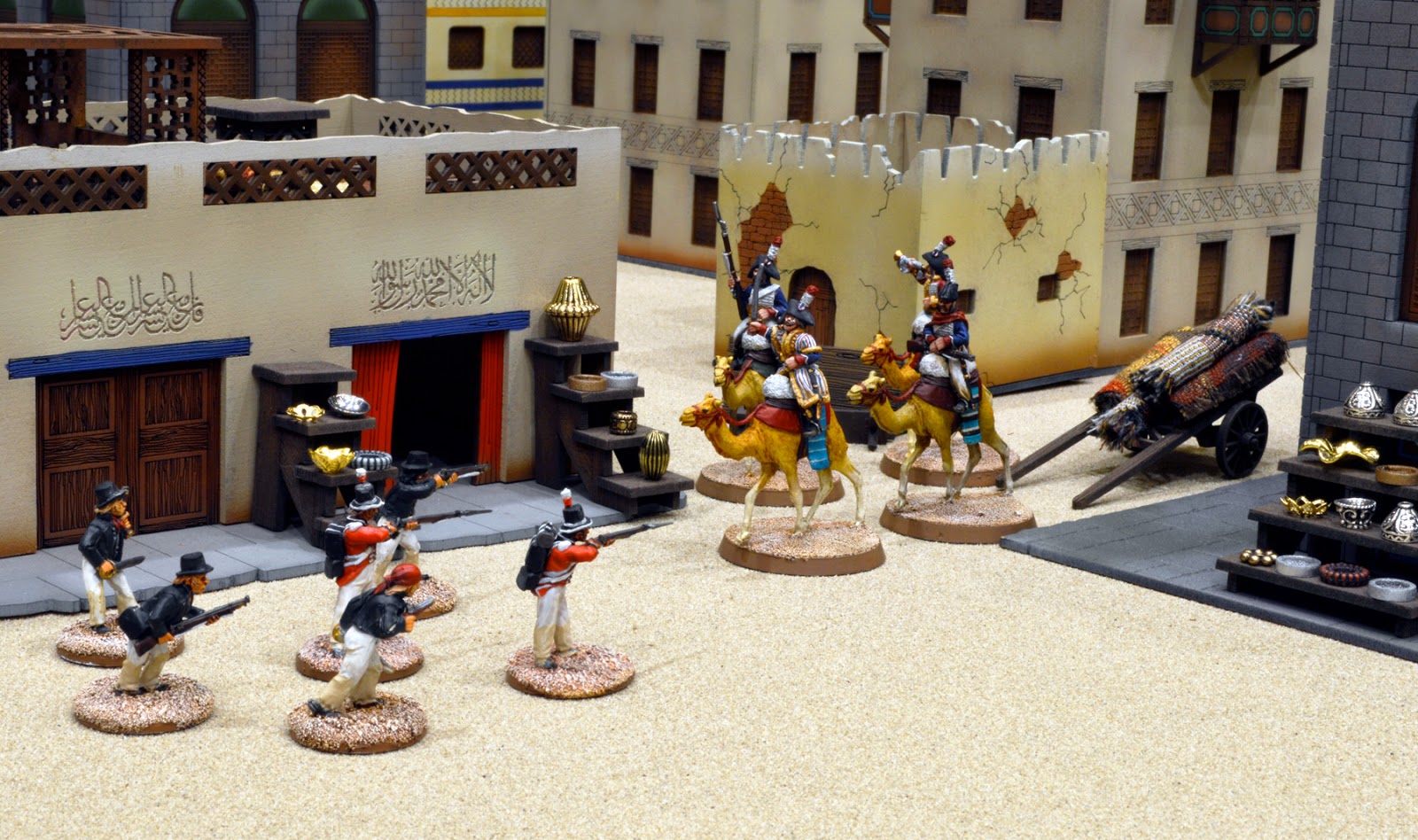 Obviously I'd like to thank everyone involved in this game: the members of the Guns of April, Lon Weiss from Brigade Games (for sponsoring the event), Beth Landing (Alex's wife) for creating the rugs and 40+ throw pillows that were scattered around the table (each hand-stitched and filled with sand), and Alex Landing of Ironheart Artisans for all his great work designing the buildings that were the standout feature of the table.

Alex plans on having laser-cut MDF kits of these buildings available from his website in early May. I'll be sure to let you know when they are available.

Cheers
Dave
Posted by davetaylor at 8:46 AM 29 comments: