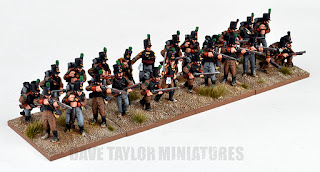 With a bit of hobby activity going on amongst "The Guns of April" crew, I've been asked to post up my recipe for my Napoleonic bases.

The Battle of Salamanca was fought on a fairly dry and dusty plain in Spain in the middle of summer. As such I decided (a long while ago) that the bases needed to be quite light, reflecting the dry feel of the area. As I've just finished off my 5th Caçadores unit (above), I figured they were as good a candidate as any to demonstrate the treatment.

Here are my five steps for "Peninsular Basing" success (from left to right):

Hopefully this little post will keep us all on the same track for our basing ; )

Cheers
Dave
Posted by davetaylor at 7:31 AM 2 comments:

The French Order of Battle has been posted and painting continues. Here is another update of my Brigade. There are some subtle details that I am considering such as the regimental numbers on the soft caps, cartridge boxes, and backpacks. For now I want to have the units finished and presentable and I will add the cool details later. I also have casualty miniatures that I would like to use to represent the hits taken by my units throughout the game. More to come on those at a later time. Enjoy the pictures. 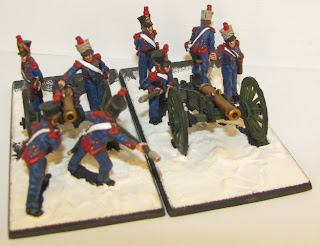 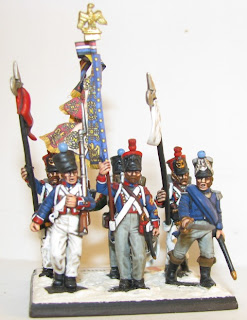 Posted by Krone Enterprises at 9:31 PM No comments:

Ask and ye shall receive!

We are just starting out with our armies where as Mr. Taylor has been working steadily for a year on his.  But don't lose faith my friends!  We have assembled an equally talented (yet slower) team that will bring you a beautiful army! I promise!  Since Dave has already covered the basics I will jump in to the winning French OOB. To the right side of each unit you will notice one of our names.  That is the person who will be building and painting that specific unit.

And now on to the good stuff!

Welcome to our little blog! 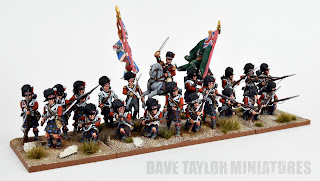 The 79th Regiment of Foot (Cameron Highlanders) ready for action!

Welcome, one and all, to our very first post on this blog! The first of vary many, we hope.

What's all this about? Well, rather than hash over it again, I'm going to guide you to the "About THE GUNS OF APRIL" box in the right column. That'll give you the basics.

Essentially though, we're a group of veteran wargamers (with closing in on 100 years of wargaming experience between us), but we're all relative newcomers to the world of Napoleonic wargaming. Drawn by the wonderful tales and colorful uniforms, we've decided to stay and put our best foot forward... by presenting a Napoleonic battle at an event we all love, AdeptiCon (held every year in April in the Chicagoland area, IL, USA)

Hopefully some of the Frenchies will chime in soon with information on how their forces are progressing.