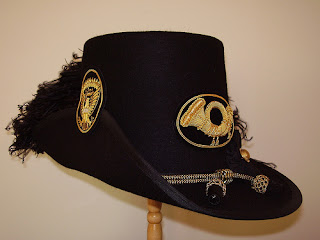 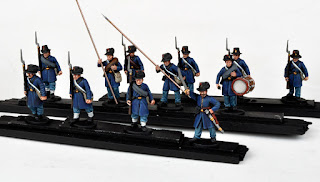 After seeing Alex's very nice North Carolina regiment in the last post, I knew I had to pull my finger out and get started on my Iron Brigade. Here you can see the first 12 models from the 2nd Wisconsin Regiment.

These models are the very nice, simple Perry Miniatures plastics, with a little bit of additional greenstuff from me, as you can see below. 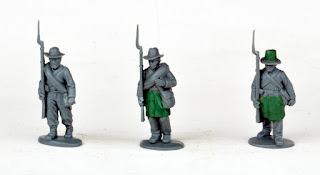 One of the most prominent features of the appearance of the Iron Brigade was their adherence to their formal uniforms. According to quite a few sources I've looked at, and discussions with other ACW wargamers, it seems the five regiments of the Iron Brigade regularly went into battle wearing their standard issue frock coat and Hardee hats, as opposed to the more common/popular (at least amongst the Union troops) sack coats and forage caps.

I really like the Perry plastics, but only the officer model has a frock coat, so out came the greenstuff and sculpting tool. It was surprising how quickly the lower half of the coats came together. Even so, I've decided that not every model in the army will have a frock coat, as I'm sure that no matter how hard they tried, the occasional soldier would have lost his frock coat, either removed and lost on a long summer march, or torn from his wounded body by a field surgeon.

You'll also notice that I built a few Hardee hats from greenstuff on top of the standard plastic slouch hats that come with the set. Again, a little bit of quick manipulation with the sculpting tool, a slice across the top with a knife (once the putty was dry) and you have a very serviceable Hardee (check the top picture for reference).

Well, I've just completed building the next 18 models to round out the regiment. More on those guys once the paint is dry.

Cheers
Dave
Posted by davetaylor at 8:24 AM 10 comments: